You are here: Home / Just for Fun / Fiction / A Perfect Memory {Short Short Story}
Disclosure: Some of the links below are affiliate links, meaning, at no cost to you, I will earn a commission if you click through and make a purchase. Thank you for supporting ModernRetroWoman.com! 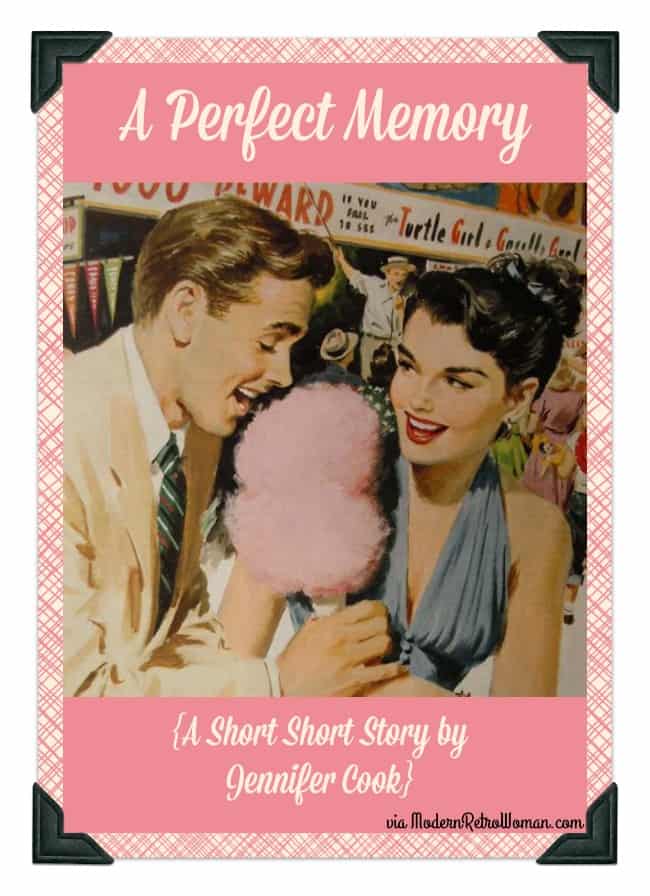 James was getting annoyed, but he didn’t want his father to see. He felt bad for his dad ever since his mom passed away last year. He was trying to be supportive, but it was hot, and he had a lot still to do on his day off. He silently cursed his brother for living out of state.

Robert stood on the driveway of the man selling the old truck. He looked at it, and was courteous enough to take a seat on the inside. “Thank you, young man. It’s a nice truck, but not what I’m looking for.” He gave a sad smile as he turned and walked away.

James just shook his head. “Dad, we’ve gone to five different places. I’m still not sure why you want an old Ford truck. We could go to the lot and pick you up a newer, safe car.”

Robert put his hand up to stop his oldest son from talking. “There’s one more I want to look at.” He gave James the address. They sat in silence for the fifteen minute drive.

“I think it’s this street,” James squinted as he looked at the numbers on the houses.

“There it is,” Robert pointed, knowing it was the one. He’d been waiting for this moment. He kept silent because he didn’t want James asking him questions.

After speaking to the owner, Robert got in the truck and closed the door. He sat back, closed his eyes, and let the memories flood back.

That summer day was one of the highlights of his life. Annie had been so excited. They rode the rides, played the games, and ate loads of junk food.

As the sun set, they went and sat in his dad’s new Ford truck. He still couldn’t believe he’d let him borrow it. They put the windows down, held hands, and took in the sights and sounds of a perfect summer night. Robert turned to face her. “Annie, will you marry me?”

She squealed with delight and kissed him over and over. “Yes, absolutely!”

James stood outside the truck door looking in. It was a strange sight to see. His dad was sitting there, gripping the wheel, eyes closed, with a huge grin on his face. James suddenly knew his dad wasn’t looking for something to drive around town. He was looking for something that would remind him of her. He’d heard the stories before, but hadn’t thought much about them. Now he realized just how much his dad was missing the love of his life. Without saying anything, James handed the seller the cash and shook his hand. He turned back just in time to see a single tear fall down his father’s cheek.

Inspiration illustration courtesy of theniftyfifties on tumblr.com via Pinterest. Using the reverse Google Images tool, I have been unable to locate the artist’s name or when this was first published.  If you know, please use the contact form to let me know.  I want to give credit where credit is due.  Thanks!