You are here: Home / Just for Fun / Theatrical Thursday / Vintage Film / Avoiding Insipid Tea {Vintage Video}
Disclosure: Some of the links below are affiliate links, meaning, at no cost to you, I will earn a commission if you click through and make a purchase. Thank you for supporting ModernRetroWoman.com!
30 shares 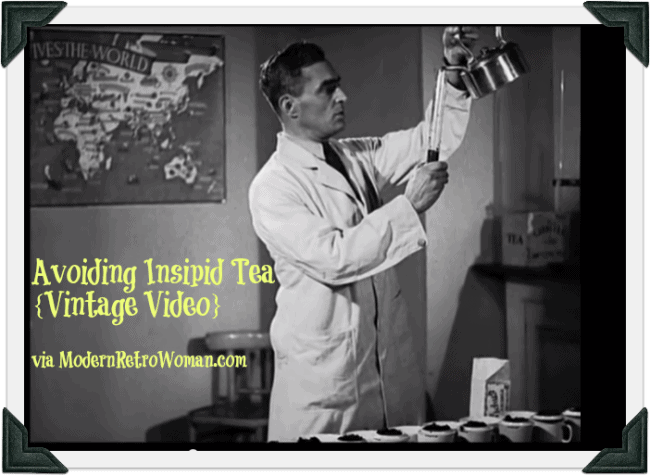 But, of course he does.  That is why he is called The Tea Master and not The Tea Making Expert.

And so we meet The Tea Master to learn his rules (I am starting to feel inspired to publish a poorly written fan-fiction based series of erotica books that will get turned into a low-budget film because everyone sees what a train wreck it is but teenage girls seem to swoon over The Tea Master so everyone ends up making obscene amounts of money…I’d have to just use my initials so you won’t know it is me associated with it…but I digress).

When we first see The Tea Master, he is playing with his tea leaves.  No.  That is not a euphemism for anything.  He really is lovingly picking up the leaves and then letting them fall through his fingers.  I feel the urge to quietly back out of the room, but no, we stay and listen to him.  I guess the jaunty music drowns out The Tea Master’s dire warnings of what can happen if we don’t follow his rules.

We then see his very large tea chest.  He warns us to keep it airtight and away from the wall.  We should not let it touch the floor.  He even makes sure that we notice the blocks of wood under his chest.  Really, I’m not making this up!  And, we’re only a minute and half into the educational film!

Now that we know the correct way of storing our immense amount of tea, it is time for The Tea Master to firmly give us his rules:

The next time we see The Tea Master, he is weighing his beloved tea leaves using a hand-held scale.  He pours the leaves into a tall, thin beaker and then, while gripping the beaker tightly,  pours water into it so that we can watch the infusion process as the leaves release their natural juices.  He warns us that if we wait too long, the tea will become bitter.  He tells us that an 8-gallon urn might take up to 15 minutes to finish the infusion process.

At this point, the film takes a sad turn as it shows young women serving tea to hundreds of soldiers and civil defense workers putting out fires from the air raids in London.  We also see displaced families with young children each clutching their own cup of hot tea.

The Tea Master then describes how to make tea for distribution in a canteen.  We see the actress pour a lot of tea into a long cylinder infuser and also a large muslin bag (which should be squeezed to extract all of the juice).

And then the part that makes me shudder happens: The Tea Master describes how to make a syrup so that the tea can be sweetened.  I was willing to go along with him up until this point but I have my limits.  I just can’t condone the sweetening of tea.  I know there are people who do that and what they do in the privacy of their own homes is their business but to actually encourage such behavior?  I just can’t support it.

The issue of when to add milk is so important that the film cuts away from the actress’ demonstration so that The Tea Master can look directly into our eyes to firmly tell us that we can cause the tea to deteriorate if we don’t handle it properly.

And then, he really starts to talk dirty to us.  Remember: “A dirty tap means dirty tea.”

The next time we see The Tea Master, he is wagging his finger at us and telling us that tea is not a manufactured article that can be made, bottled up, and served at will.  It must be freshly prepared every time and success or failure depends upon the attention of the Six Golden Rules.

Boy is The Tea Master going to be surprised in 50 years or so when he discovers Snapple in the grocery store.  It is going to get ugly when he finds out that the Six Golden Rules are no longer being followed.

Click here if the video player is not working for you

Do you follow the Six Golden Rules?  Do you prefer your it straight or *shudder* sweetened?