You are here: Home / Technicolor Life / Inspired Life / But, but, but…That’s Sacrilegious!
Disclosure: Some of the links below are affiliate links, meaning, at no cost to you, I will earn a commission if you click through and make a purchase. Thank you for supporting ModernRetroWoman.com! 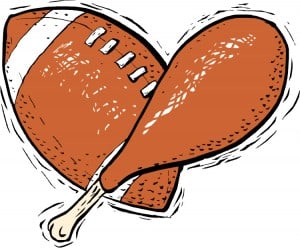 It is three weeks until Thanksgiving in the United States.  That time when we gather around the television set to watch football and sort through the advertisements to determine which line to wait in for the 4:00 a.m. opening of Black Friday.  And, in between those events, we stuff ourselves until we have to unbutton the top button of our pants (unless we had the foresight to wear something with an elastic waistband).

I’m not sure when Thanksgiving became a day to celebrate excess. Even our planning of the menu has gotten so far out of control that we become overwhelmed and feel that the only option is to order the  deluxe “Thanksgiving in a Box” and then we feel guilty and end up spending days in the kitchen adding more food to the enormous portions that will come in the store-catered box.

I say “enough.”  I’m drawing a line in the mashed potatoes.  If we truly want to live like our grandmothers, we have to stop giving in to the urge to be excessive (and obsessive).  It’s not like we can’t get this kind of food any time of the year, any time we want it.  Thanksgiving is not “the last supper.”

In reviewing two vintage cookbooks and one book on entertaining, the one thing that jumps out at me is that the menus really aren’t all that big.  The menus are special but not excessive.  This tells me that we don’t have to have 14 different side dishes and 5 different kinds of desserts.  Believe it or not, the meals seemed to be about celebrating blessings…about giving thanksgiving for the good things in our lives.

Will you join me in saying “no” to the excess and the stress and the obsession?  I know what I’m asking is sacrilegious in our modern culture, but just because everyone else is being excessive, doesn’t mean we have to be wacko, too.  I mean, we wouldn’t jump off of a bridge, would we, just because they are?  But, in essence, we are symbolically jumping off of that bridge just because we think we ought to do so in  order to “make everything special.”

Here are what Thanksgiving menus looked like prior to 1963:

When we stop “shoulding all over ourselves” about what we think we have to do for Thanksgiving–and the Holidays, for that matter–then we can liberate ourselves from the messages that the media puts forth that are truly just designed to get us to spend our hard earned money.  We have a choice and a say in the matter.  Let’s make those choices instead of being in default mode.

Try this out this year: Only make what people truly love and don’t have every day.  See how many people notice that the ________ casserole that nobody likes but still gets made every year out of a sense of tradition is not on the table.