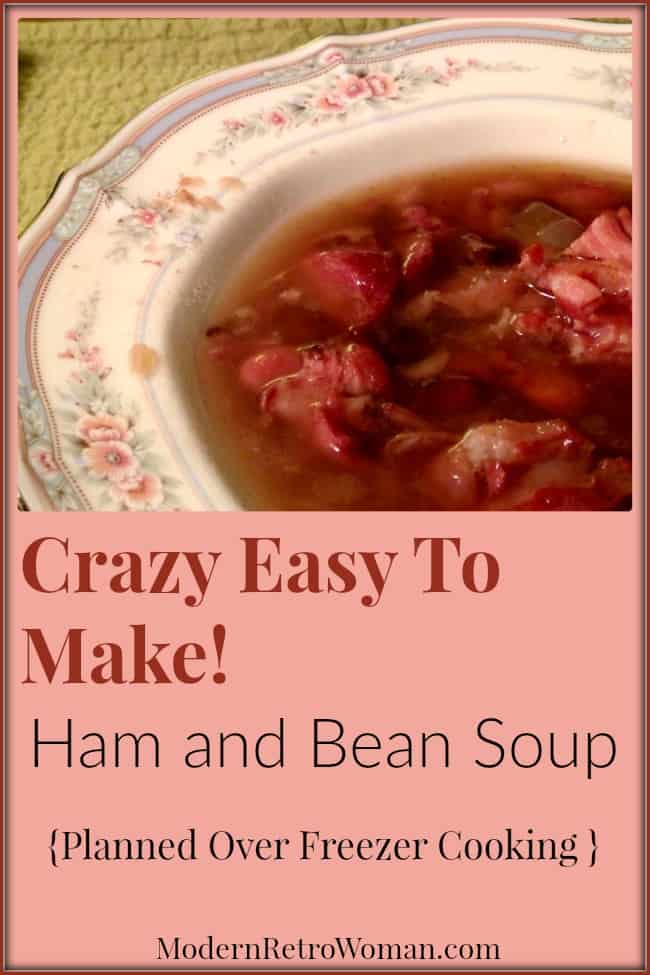 I am a huge fan of the Once-a-Month Cooking concept.  But I don’t actually do my cooking all in one day.  Instead, my freezer cooking follows the mid-century idea of “planned overs.”  Using this strategy, I can stretch my food budget a little while filling my freezer with lots of healthy frozen meals.  This blog post shows how you can make easy ham and bean soup using “planned overs.”

What is Planned Over Freezer Cooking™?

When I started collecting vintage cookbooks and trying out the recipes, I noticed that a lot of them called for using “leftovers” from other meals.  As I dug deeper, I discovered the concept of preparing a meal, such as ham, with the intention of using the leftover ham in other dishes being served the same week.  The cookbooks were calling them “planned overs.”

Since there are just two of us, I took it a step further and started freezing the leftovers from the planned overs.  The result is that I only have to cook from scratch a couple of times per month.

For the next few weeks, the vintage recipes I share with you will focus on Planned Over Freezer Cooking ™.  This week:  Our first recipe uses the planned overs from a whole ham.

Go Ahead, Buy that Whole Ham!

Have you ever stopped to consider how much meat you can get from a whole ham?  I love, love, love buying hams after holidays.  You’ll find spiral hams with crazy glazing packets in a closeout bin.  The ham is perfectly fine but the only person who thought that a particular glaze would be good is the person who ordered forty cases of the ham.  I toss out the glaze that comes with the ham and make my own.

And then the fun begins!  According to FoodSafety.gov, you can freeze cooked ham for 1-2 months.  If I’m not going to use the leftover ham within a few days of opening the package, I cut it into chunks or groups of slices and toss the bags into the freezer to use in a planned over recipe.

The Hambone is Connected to the Stock Pot

I promised a crazy easy ham and bean soup.  And it is now time for the main event!

The beauty of this recipe is that you don’t have to worry about getting as much ham as possible off of the hambone.  Because you will be using it in this crazy easy soup.

Here are the ingredients:

To make the soup:

I freeze the soup in Ball’s 1 1/2 pint canning jars*.  These larger jars enable me to put two cups of soup (two servings) in the jar while still leaving a lot of room for expansion when the liquid freezes.  As long as they aren’t overfilled, Ball says they are safe for freezing.

Aside from the dinner for two when I make the soup, I can usually fill four or five 1 1/2 pint canning jars to freeze.  If we have the soup once per week, that is four weeks where I just have to add a salad and bread for a nice and healthy meal.  And much tastier than a soup from a can to boot!

Note: I’ve been freezing soup in canning jars for about 15 years and have only had one crack on me in the freezer.  The main things to keep in mind when using canning jars is that they need to have enough expansion room at the top and they have to be absolutely strait up and down.  The traditional jars with “shoulders” (that curve at the top of the jar) are not rated freezer safe.

What do you usually do with the leftover hambone from a holiday ham?  Do you make soup or do you do like I did when we were first married: I froze it and then forgot it was there until it was time to move.  I told you in the About Me section that I didn’t know what I was doing back then!

Do you have a favorite ham and bean soup recipe that would be perfect for Planned Over Freezer Cooking™?

To your well planned freezer cooking,

*This is an Amazon affiliate link.  If you click on it and decide to order the canning jars from them, Amazon will pay me a small referral fee.  Thank you for supporting Modern Retro Woman! 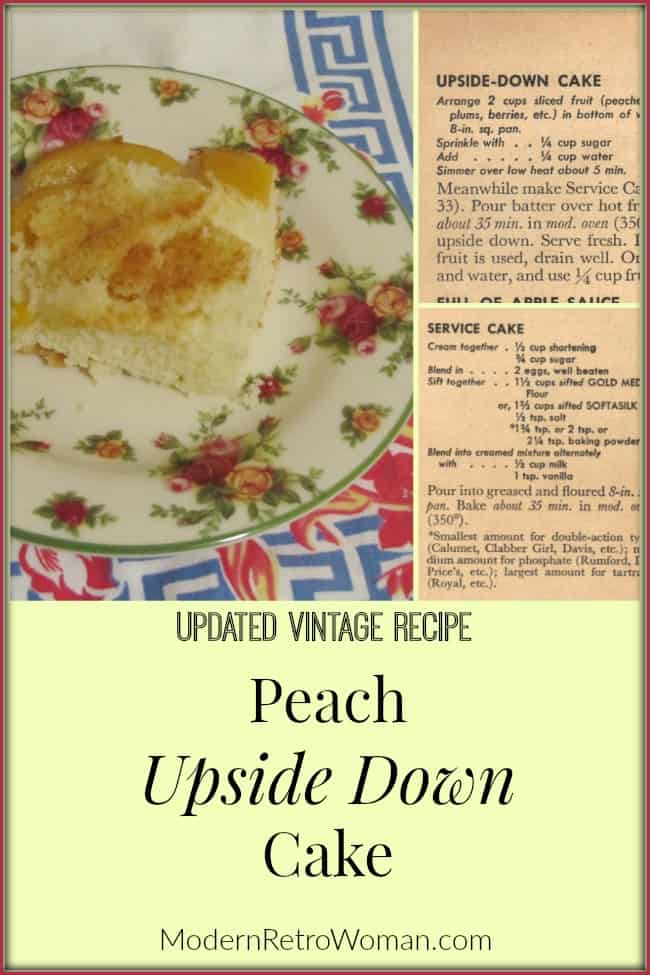 I mentioned the other day that people were healthier during World War II because of sugar rationing.   But that doesn’t mean they didn’t have any desserts!  A wise homemaker stretched those precious rations by baking fruit-based desserts.  This vintage rationing recipe for Peach Upside Down Cake doesn’t have any rainbow sprinkles and or a thick layer of frosting, but it is absolutely delicious.

And the nice thing about it?  It gets most of its flavor from the peaches and not the tons of sugar (and “natural flavorings”) that modern boxed cakes have in them.

Did I mention that it is also really easy to make, too?  Let your children make it while you supervise.  That’s how easy it is!

This recipe calls for canned peaches but you can use other fruit, too.  Because that’s what rationing recipes were about–using what was available.

Bake this cake on Sunday and enjoy it throughout the week! 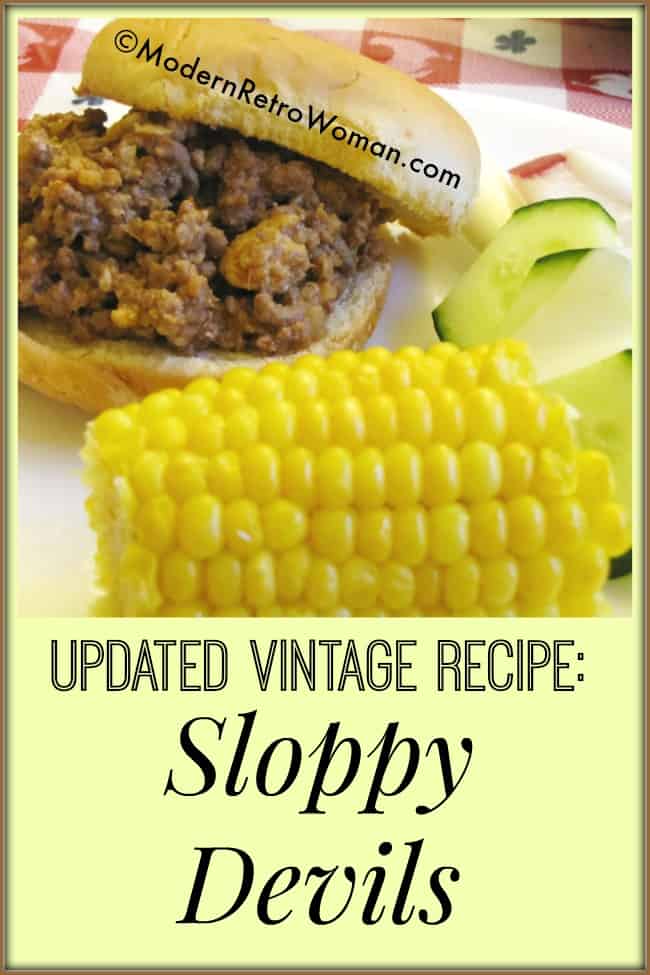 You know it has been “one of those days” when the thought of forming hamburger patties seems like too much work!  Luckily for us, our favorite vintage recipe for moist and flavorful hamburgers works quite well as a “sloppy Joe” recipe, too.  Except for the hamburger, everything comes from some sort of bottle and goes together in about 20 minutes.  This easy vintage recipe for sloppy devils is certainly faster and more delicious than take-out will ever be!

If you need to feed a crowd after a game (you’ll need to double or triple the recipe) or are just feeling too tired to cook, I encourage you to try my “sloppy devils!” Serves 4
Too tired to cook or need to feed a crowd? These delicious sloppy Joe's go together in less than 20 minutes.
Write a review
Save Recipe
Print
Ingredients
Instructions
Notes
By Dr. Julie-Ann McFann - The Modern Retro Woman
Modern Retro Woman https://www.modernretrowoman.com/ 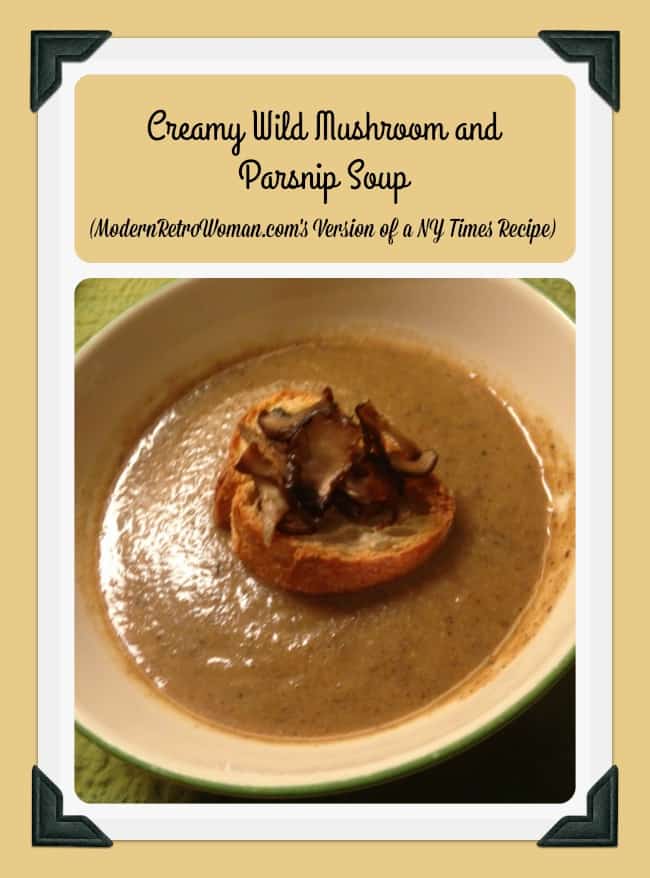 If you follow my Facebook Page, you know that I had my wisdom teeth taken out last month.  While I didn’t suffer any post-surgery calamities, it did take my wounds a little longer to heal because of my age.  So what does a girl do when she is limited to soft foods?  Why, make soup, of course!

I have to admit that I have fallen in love with the New York Time’s Cooking website.  I used to think that it would be filled with hoity-toity recipes that the average person wouldn’t be able to cook.  But I was wrong.  Oh so very wrong. It is actually chock full of recipes at every skill and time level as well as ingredient price points.

So, I ventured into the site and did a search on main dish soups and  Creamy Wild Mushroom and Parsnip soup popped up.  I love wild mushroom soup and it would only take about an hour to make.  I jumped on it.

I followed the recipe pretty closely but made the following two changes:

This soup is easy to put together and the result is pretty luxurious.  I took leftovers with me to work all week.

So, if you are looking for an out of the ordinary mushroom soup that keeps pretty well and is easy to throw together, I encourage you to give this one a try.