You are here: Home / Home Ec 101 / Home Cooking / Recipes / Vintage Recipe / Chicken Broth Parisian Style {Vintage Recipe}
Disclosure: Some of the links below are affiliate links, meaning, at no cost to you, I will earn a commission if you click through and make a purchase. Thank you for supporting ModernRetroWoman.com!
43 shares 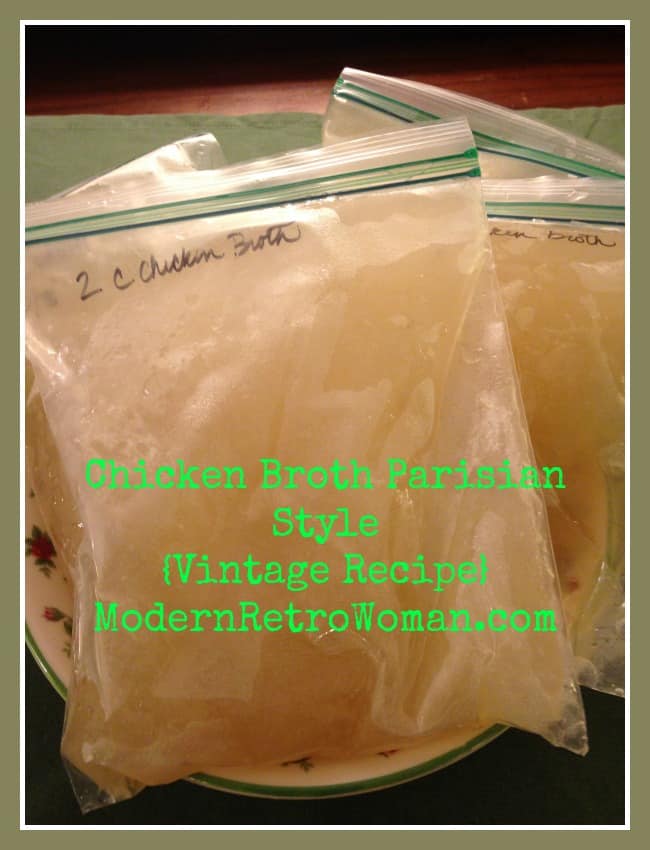 Just like an undergarment can make or break the look of an outfit, so, too, a good quality broth sets the foundation for a recipe. After a couple of years of trying to use the canned stuff from the supermarket, I finally got the stockpot out to make chicken broth.   But instead of using a generic chicken broth recipe, I turned to my Gold Cook Book (1947) by Master Chef Louis P. De Gouy.  Under Chef De Gouy’s written guidance, I decided to try the Chicken Stock Parisian Style.  Don’t let the name of the recipe intimidate you, though.  The hardest part about this recipe was having to go to three grocery stores before finding any parsnips.

[Tweet “Parisian Chicken Broth is a back burner, aroma filling your house kind of recipe. “]

When it cools, ladle it into freezer bags in one or two cup quantities.  Freeze flat.  After the broth is frozen, you can line the bags up like books to save space in your freezer.

I used the broth as the foundation for a tortellini soup (cheese tortellini, some cubed ham, some broccoli, and some sliced scallions and you have soup in about 15 minutes).  The difference between the soup made with this broth and the canned broth was profound.  This difference is why I’m willing to take the time to cook from scratch! Yields 5
This is a throw on the back burner and let the aroma fill your home kind of recipe for a full-flavored chicken broth.
Write a review
Save Recipe
Print
Cook Time
4 hr
Cook Time
4 hr
Ingredients
Instructions
Notes
By DrJulieAnn - The Modern Retro Woman
Adapted from The Gold Cook Book (1947)
Adapted from The Gold Cook Book (1947)
Modern Retro Woman https://www.modernretrowoman.com/