You are here: Home / Home Ec 101 / Home Cooking / Recipes / updated vintage recipe / Chicken Lafayette {Vintage White House Recipe}
Disclosure: Some of the links below are affiliate links, meaning, at no cost to you, I will earn a commission if you click through and make a purchase. Thank you for supporting ModernRetroWoman.com!
38 shares 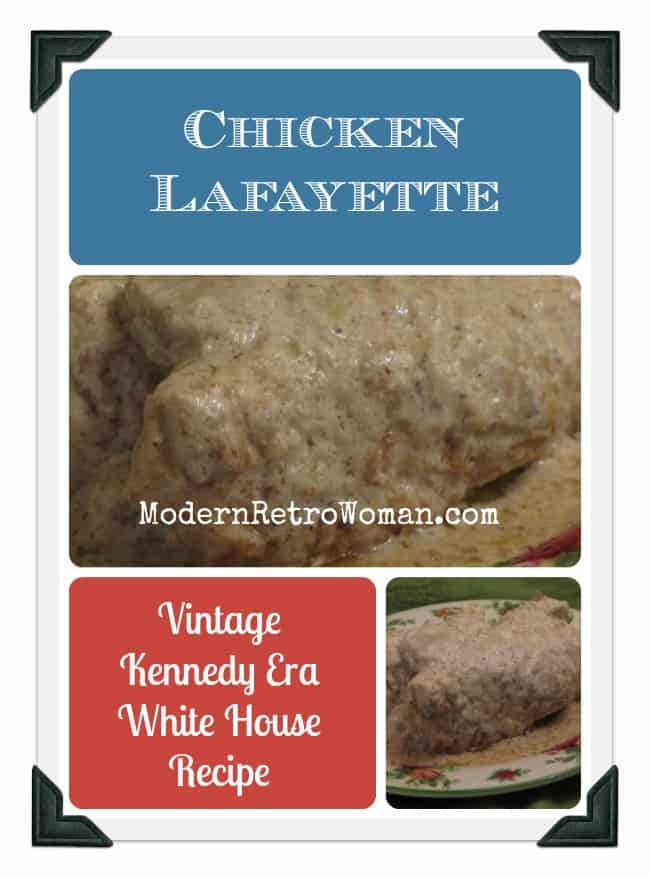 As I was rummaging through a used book store, I came across a cookbook written by Francois Rysavy, the former White House chef during the Eisenhower, Kennedy, Johnson, and Nixon administrations.  What struck me is how very simple many of the meals were.  I guess I always imaged elaborate meals but, apparently, canned cream of chicken soup was a favorite of JFK’s.  Seriously, the recipe says to follow the directions for making the soup, add a dollop of whipped cream and top with a sprinkle of paprika.  So, the next time you’re feeling presidential, whip out that cream of chicken soup!

This recipe for Chicken Lafayette is from a luncheon hosted by the Kennedys to honor the Prime Minister of Greece on April 17, 1961.  The luncheon consisted of

The original recipe called for chicken consommé but I substituted chicken broth and a bit of chicken bouillon since my grocery store didn’t have the consommé.  Consommé is made without water like broth is which results in a richer flavor.  Just be careful if you use the bouillon cubes to deepen the broth’s flavor because of the high sodium content of both the broth and bouillon.  You probably won’t need to add any of the salt called for in the recipe.

If you have a lot of bacon drippings on hand, you will appreciate that this recipe calls for 1/2 cup of it.  I don’t generally have that much bacon drippings around so I complimented the bacon drippings with lard to get to the called for amount of fat.

Despite having to make the substitutions, this recipe is very easy to make.  I had the butcher cut up a whole chicken for me but you can use whatever chicken parts you want.  The gravy is to die for.  I resisted the urge to just put it in a bowl and eat it like soup!