You are here: Home / Technicolor Life / Inspired Life / D.Y.I. Or Self-Sufficiency?
Disclosure: Some of the links below are affiliate links, meaning, at no cost to you, I will earn a commission if you click through and make a purchase. Thank you for supporting ModernRetroWoman.com! 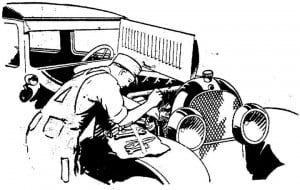 We’ve had a couple of “adventures” with our  pickup in the past week.  The heater core decided it would start leaking and it was spewing toxic air/steam into the cab over the weekend.  We were feeling pretty demoralized until we decided to see if repairing it was a task that my husband could do himself.  We looked it up in the repair manual and discovered that it was, indeed, an “easy” repair.  While it wasn’t quite as easy as the manual made it out to be, it certainly was doable and my husband completed the repair within a few hours.

But then we discovered that the left rear brake/ blinker light wasn’t working.  My husband was afraid he had messed up the wiring when he did the heater core repair because the tail-light went on when he turned the headlights on.  Again, we decided to see if it was something simpler than the wiring.  Through a series of trial-and-error type of tests this morning, we discovered that one filament in the light bulb responsible for the brake/blinker and tail-light was burned out.  Once again, we took care of the problem ourselves as we have on countless occasions when issues around the house and car arise.

My husband and I both come from families that were self-sufficient.  Because we didn’t have a lot of money while I was growing up, my father, often with the help of my grandfather, did all of the repairs around the house and cars himself.  My husband’s father essentially restored a Civil War-era house by himself. My great-grandmother made most of my clothes when I was a child and through my junior-high years until she passed away.

This type of self-sufficiency seemed normal to my parents and to us.  Our parents had grown up during The Great Depression followed by World War II.  Additionally, my grandparents had grown up on farms where they learned how to make it, grow it, make do, or do without.

The big thing right now is to “Do It Yourself.”  But one of the things I’ve noticed with a lot of DYI projects is that they aren’t necessarily encouraging self-sufficiency.  Sure it is great to build a pagola in your backyard or know how to paint horizontal stripes but I’ve been hearing and reading about a generation of people who don’t know how to be self-sufficient anymore.  Cooking from scratch means that they scratch their bellies while perusing the take-out menus.

I’m not trying to be snarky.  I am truly alarmed by the lack of the basic skills that we used to learn how to do in Home Economics, Wood Shop, and so forth.  Being self-sufficient engenders a tremendous amount of self-confidence in one’s ability to tackle any situation that comes along.

I’ve been thinking about the tremendous fascination young people have with the post-World War II era.  The blog, My Year 1955, was an instant hit when 50’s Gal decided to live a year as if it were 1955.  It has been interesting to watch her confidence blossom as she has learned to move beyond just trying to recreate 1955 by buying vintage things to really learning how to do things on her own.

I’m thinking out loud here, but I’m wondering if the the retro/vintage fascination is, in part, a hunger for the same kind of self-confidence and self-sufficiency that our parents, grandparents, great-grandparents possessed.

What do you think?