You are here: Home / Technicolor Life / Wise Words of the Day / “Encouragement” Shouldn’t Be Newsworthy
Disclosure: Some of the links below are affiliate links, meaning, at no cost to you, I will earn a commission if you click through and make a purchase. Thank you for supporting ModernRetroWoman.com! 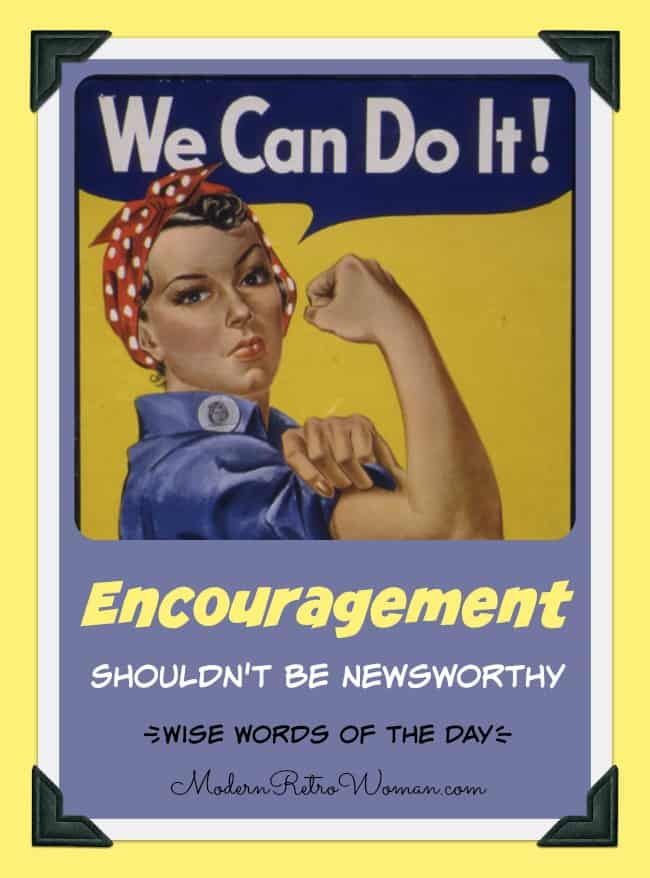 We should seize every opportunity to give encouragement.  Encouragement is oxygen to the soul.  The days are always dark enough.  There is not need for us to emphasize the fact by spreading further gloom. (George M. Adams)

There is a common type of update that shows up in my Facebook news feed: Someone writes a post about how someone provided encouragement for someone else and it goes viral.  The comments usually include a whole bunch of people declaring that the post is proof that there are still some good people in the world.

But I disagree with the sentiment that there are only some good people in the world.  I believe most people are good.  We just happen to forget it because there is too much focus on the doom and gloom instead of the good things around us.  We default to the worst case scenario instead of being pragmatically optimistic.

Here’s the deal:  If we are wrapped up in the doomsday scenario, it makes it hard to give encouragement to others.  If we don’t think everything is going to be okay in the long run, we can’t be encouraging to ourselves and others.  And then we start worrying about our survival and begin to think that others are getting something we aren’t and the darkness keeps spiraling downward.

It doesn’t have to be this way.  We need to embrace the mid-century mindset of encouragement.  Even during the darkest days of World War II, people were encouraging each other and “We Can Do It!” became the mantra at Westinghouse.

A basic tenet of charm is that we take the focus off of ourselves and make others feel valued.  We can help people feel authentically valued by “listening between the words” in order to hear what they are really telling us.  This means being fully present with what the other person is saying and how she is saying it rather then thinking about our own response while the other person is speaking.

When we are fully present with someone else, we are able to offer encouragement beyond basic platitudes. And, a nice by-product of giving authentic encouragement is that we feel better about our world, too.

My grandfather worked as a set builder at MGM during the golden days of Hollywood.  He would tell me stories about the movie stars he met.  The guys working behind the cameras always appreciated it when some of the movie stars would come around to talk to them and express their appreciation for their hard work instead of hiding out in their dressing rooms all of the time.  These glamorous stars got to know the crew and would offer encouragement to them.

Let’s change the world around us and throw off the mantle of doom and gloom.  Let’s find ways to encourage other people as often as we can.  Maybe then giving encouragement won’t be considered newsworthy anymore because it is the norm.

What is your favorite way to encourage others?