You are here: Home / Home Ec 101 / Meal Planning / Food for Thought: Meat Consumption Then and Now
Disclosure: Some of the links below are affiliate links, meaning, at no cost to you, I will earn a commission if you click through and make a purchase. Thank you for supporting ModernRetroWoman.com!
25 shares 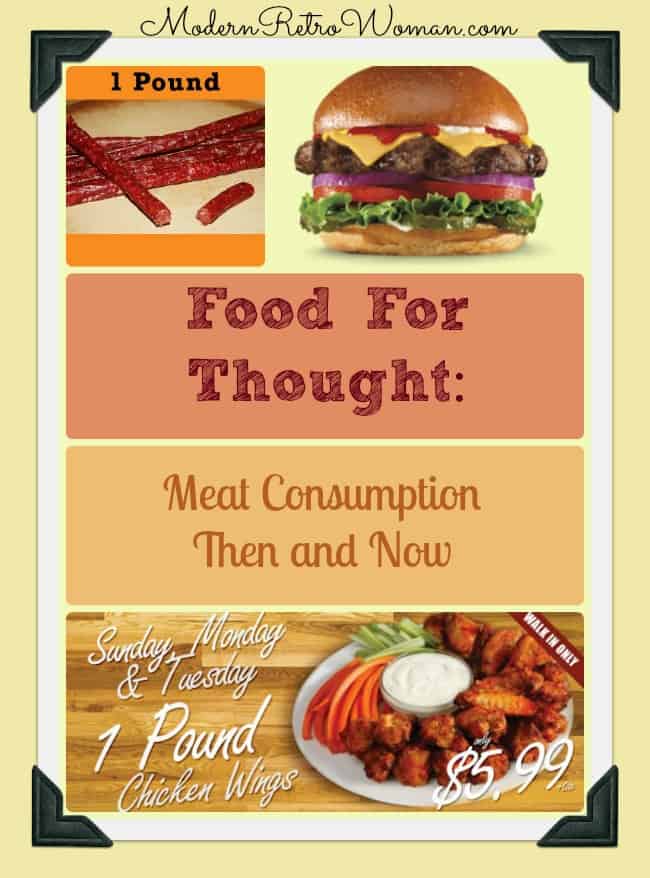 You know I’m all about trying to use the Basic 7 for meal planning like our counterparts did in the 1940s and 50s.  But the Basic 7 doesn’t really give us the amounts we should eat.  I receive emails all of the time asking for guidance on serving sizes from that time period.  So I did some digging.  Meat consumption is one of the biggest differences between what was eaten during the post war period in the United States and now:

According to Dan Buettner in The Blue Zones Solution: Eating and Living Like the World’s Healthiest People, the average modern American consumes approximately 200 pounds of meat per year.  Unfortunately, he did not cite his resource for that statistic so I cannot share it with you.

However, we can turn to a report from the United States Department of Agriculture (USDA) for some information detailing the differences in meat consumptionfrom 1950 through 2000 (I tried to find reports more recent than that but all I could find was undated meat consumption tables that shows men are eating a lot more meat than women).  The USDA Factbook (PDF) tells us that Americans were consuming approximately 195 pounds of meat in 2000 which is about 57 pounds more per year than they did in 1950.  Most of the increase came from eating more poultry (about 46 pounds per year more in 2000 than in 1950).

Now, you know I’m a carnivore.  I love my meat.  But these numbers really gave me pause and made me rethink my meat consumption levels.  That is a pound more of meat per week I was eating compared to my 1950s counterparts.

The moral of the story is that if we want to eat like they did in 1950, we need to limit our meat consumption to approximately 2 1/2 pounds per week.