You are here: Home / Just for Fun / Glamour Shot of the Day / Happy Birthday, Audrey! {Glamour Shot of the Day}
Disclosure: Some of the links below are affiliate links, meaning, at no cost to you, I will earn a commission if you click through and make a purchase. Thank you for supporting ModernRetroWoman.com!
56 shares 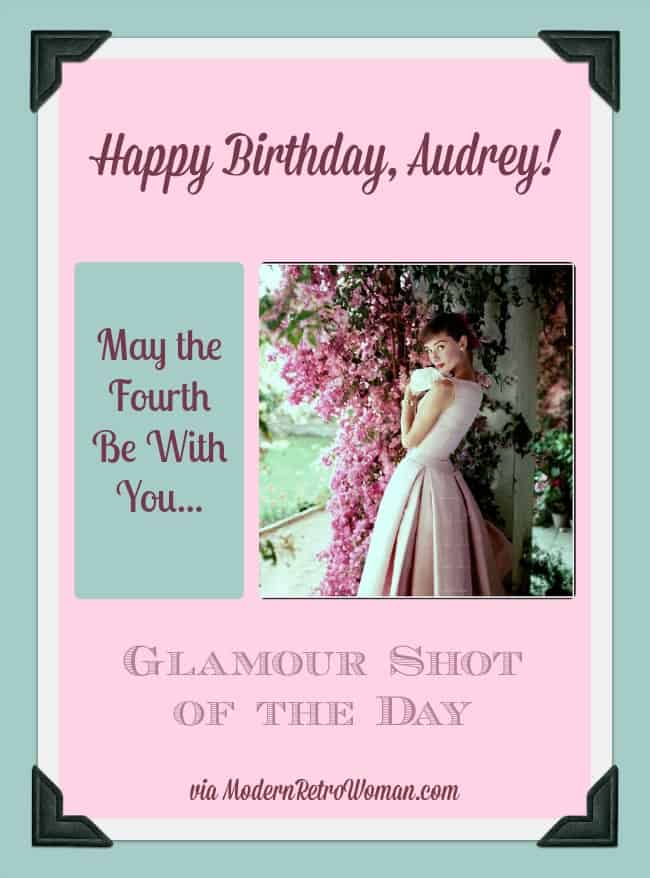 Apparently Audrey Hepburn had the good sense to be born on Star Wars Day.  So, for today’s Glamour Shot of the Day, we get a “twofer.” Although, if we’re going to get technical, nobody knew about The Force back in 1929 when she was born.  Anyway, happy birthday, Audrey!  May the Fourth be with you.

Today’s shot is courtesy of Sophia on Flickr.com who tells us

Audrey Hepburn photographed by Norman Parkinson at “La Vigna” (a charming villa outside Rome, rented by Audrey and her husband Mel Ferrer) for the American Vogue, during a break in the filming of “War and Peace”, in August 1955.

Cocktail dress: Givenchy (specially for an afternoon cocktail: sleeveless, of grosgrain in a shade of light pink with some white stripes, detail of buttons of resin in the front, skirt with pleats starting from the hip line, length below the knees, liner of light pink silk, of his collection for the Spring/Summer of 1955).

Notes: Her hairstyle was done by Grazia De Rossi and her makeup by Alberto De Rossi (Grazia’s husband).

Image and info from Eduardo!

I want to point out that the pleats of the skirt of the dress add some width to her famously waif-like figure but the bell-shape of the skirt and the lines of the panels create clean lines that create a symmetrical look that please the eye.

The Fourth was definitely with this one!