You are here: Home / Home Ec 101 / Home Cooking / Recipes / Vintage Recipe / Hearty Ham and Bean Soup {Vintage Recipe}
Disclosure: Some of the links below are affiliate links, meaning, at no cost to you, I will earn a commission if you click through and make a purchase. Thank you for supporting ModernRetroWoman.com!
35 shares 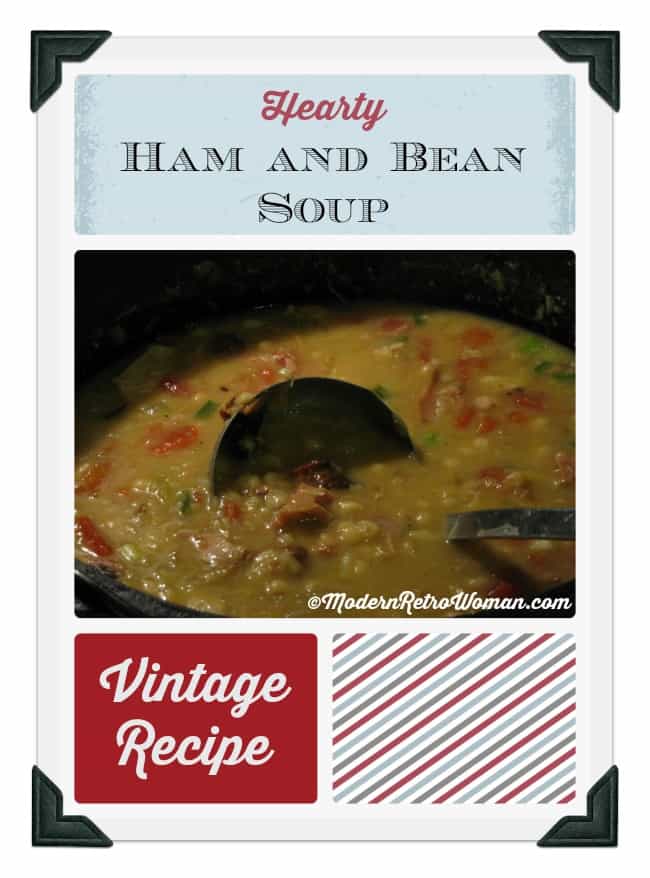 How was your Christmas ham?  Delicious, right?  But you had sooooo much left over that you’ve been having ham sandwiches, ham omelettes, creamed ham over toast, and you’re even considering leaving it on the neighbor’s front porch with the last of the zucchini from your garden.  You’ll be happy when it is finally gone!  Well, I have a secret weapon so that you can stop trying to be creative in how to serve it at yet another meal: Hearty Ham and Bean Soup.  This vintage recipe adapted from The New Antoinette Pope School Cookbook (1961)*  will enable you to use up the rest of your ham and toss it into the freezer to savor on a chilly evening when you don’t feel like cooking.

The original Hearty Ham and Bean Soup recipe called for a hambone.  If you had a bone-in ham, go ahead and toss it into the pot.  But, it isn’t necessary.  I used about four cups or so of ham chunks and pieces.  Since I didn’t worry about whether the ham was uniform, it made for a more rustic and authentic looking soup.

Hearty Ham and Bean Soup lives up to its name.  Unlike the canned soup that claims to be satisfying, a cup of this soup really filled us both up.  This is the time of year when everyone is making Hoppin’ John, but we’ve decided that this year we are going to tempt fate and have the ham and bean soup on New Year’s Day.  We’re going to call it “Hoppin’ Julie.” This hearty soup is a perfect way to use up leftover ham, toss it in the freezer, and savor on a chilly evening when you don't feel like cooking.
Write a review
Save Recipe
Print
Ingredients
Instructions
Notes
By DrJulieAnn - The Modern Retro Woman
Adapted from The New Antoinette Pope School Cookbook
Adapted from The New Antoinette Pope School Cookbook
Modern Retro Woman https://www.modernretrowoman.com/
*This is an affiliate link for Amazon.com.  If you click on it and choose to buy a copy of the book, Amazon will give me a very small referral fee.  Thank you for supporting ModernRetroWoman.com!