You are here: Home / Technicolor Life / Wise Words of the Day / How to be an Active Choice Maker
Disclosure: Some of the links below are affiliate links, meaning, at no cost to you, I will earn a commission if you click through and make a purchase. Thank you for supporting ModernRetroWoman.com! 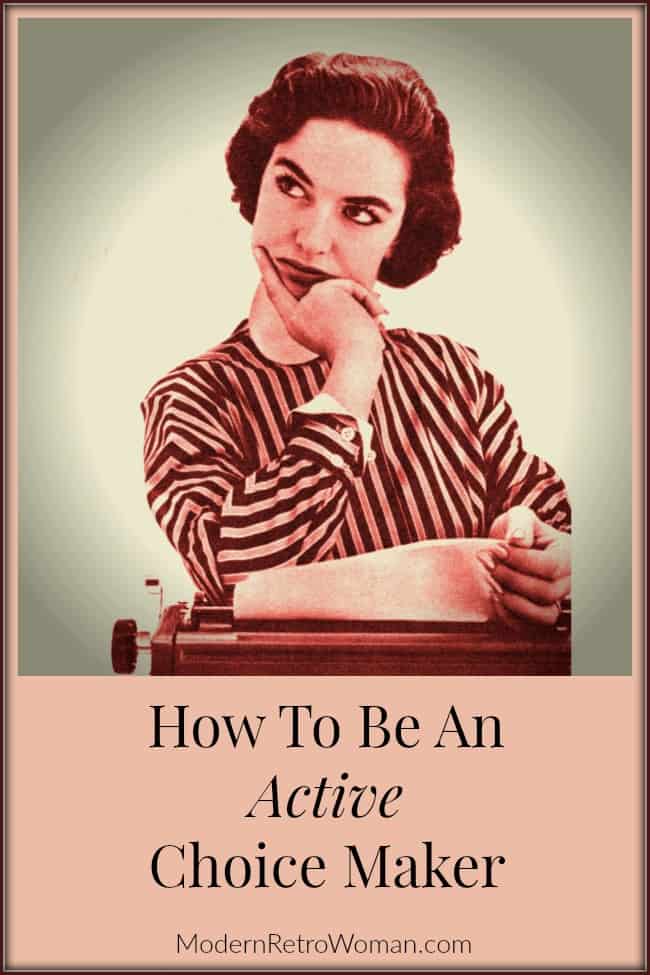 When you have to make a choice and don’t make it, that is in itself a choice – William James

The other day, I walked away from what seemed like the perfect job opportunity.  And sighed a huge sigh of relief.  You see, I took ownership of my future instead of waiting to see if they would make an offer I couldn’t refuse.

On paper, there seemed to be a perfect fit between my academic expertise and the job.  Plus it was at an elite university in my home state of California.  The Skype interview with the committee members seemed to go well.  I made it to the final round: a seven-hour on-campus interview (which is normal for academic jobs).

By the end of lunch, I was pretty sure that I didn’t want to the job.  But because it had seemed like a perfect match at the beginning and I knew others would think I was crazy for walking away from it, I held onto the idea that maybe my feelings were a result of jet lag or exhaustion.

I couldn’t put my finger on exactly why, but my intuition was telling me to run.  I really, truly, didn’t want the job but figured if they gave me an amazing offer, I’d accept it.

Except the feeling of dread didn’t go away.  And, so, after yet another conversation with The Mister about it, we agreed that I would withdraw my application before they even made an offer.

Being an Active Choice Maker is Empowering

In truth, being an active choice maker is about taking ownership of our choices–even if they turn out to be wrong–instead of wringing our hands and whining that we “had no choice but to do ____ or to go along with everyone else.” (I am hearing my mother’s voice saying, “If everyone decided to jump off a bridge, would you that, too?”).

Being a passive choice maker is disempowering and soul sucking.  How can we feel confident when we are constantly being buffeted about by other people’s choices?

Even when we feel “trapped,” we can make active and empowering choices.  In the book Something from the Oven: Reinventing Dinner in 1950s America, Laura Shapiro notes that “the trapped housewife was very much a media invention (232).”  Not that there weren’t women who were bored stiff.  But the successful homemakers made choices to ensure they were intellectually and creatively stimulated in addition to their homemaking responsibilities.  Indeed, in 1960 about 40% of middle class women with school-aged children were working outside of the home.

It Always Comes Down to Values

In the end, my decision to walk away from a seemingly perfect job opportunity came down to a difference in core beliefs and values between the people I would work for and myself.  Based upon previous experience, I recognized the signs that the things that are important to me would be diminished, if not silenced, if I took the job.

Did I make the right decision?  I will never know for sure.  Heck!  I will never even know if they would have offered the job to me!  But I feel empowered by my decision.  Here are some strategies to help you be an active choice maker:

We Always Have Options

Eons ago, psychologist David Schnarch coined the term “two-choice dilemma.”  Basically, he says that we always have choices.  And if we say we don’t have a choice, what we’re really saying is that we don’t like the options being given to us.  That is okay.  But we have to choose one and then make the best of it.  It may be scary at the time but it is the only way we can live empowered lives.

I’ve as yet to hear from the person who would have been my boss.  I know he received my letter because he cancelled a phone call with one of my references.  His silence reinforces for me that I probably made the right decision.

I should also note that I feel blessed that I was able to walk away from this job opportunity because I already have a good job where I enjoy the respect of my colleagues.  Four years ago when The Mister’s business was collapsing, though, I would have had to take any job that was offered to me.

Here’s to the fabulous Technicolor life of your own choosing!