You are here: Home / Home Ec 101 / Entertaining / How To Have Guests–and Enjoy Them!
Disclosure: Some of the links below are affiliate links, meaning, at no cost to you, I will earn a commission if you click through and make a purchase. Thank you for supporting ModernRetroWoman.com! 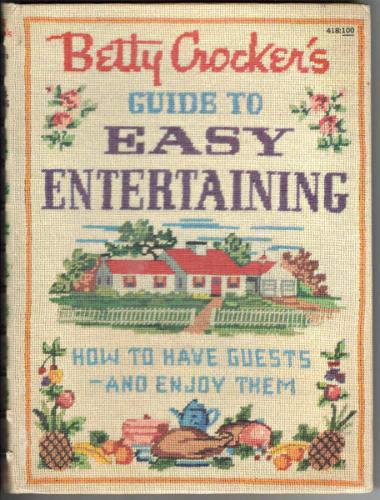 The student association at the community college where The Mister is an adjunct professor holds a flea market every month. We prefer this smaller flea market to the much more famous Rose Bowl Flea Market because it is just large enough to find some treasures but just about the time I’m feeling overwhelmed, we’ve visited most of the booths.  Plus it’s free.  I’ve never understood the concept of dropping $20 for the right to spend money at flea markets, swap meets, and home shows. I will also confess that I don’t think the flea markets out here are as good as the Lambertville Golden Nugget Flea Market which is where a good chunk of my vintage brooch collection and my husband’s movie projector collection were purchased.   I think it is because the entertainment industry snaps up the really good stuff to use as props, costumes, etc.  But, I digress….

At last month’s flea market I found Betty Crockers Guide To Easy Entertaining: How To Have Guests and Enjoy Them

. I love the second part of the title: How to actually enjoy having those guests that you’ve invited over.  I know for me, I’ve planned a get together and then have been frustrated.  For instance, there have been times when I’ve said “arrive at 5:00 for pre-dinner socializing, we’ll eat at 6:00.”  Much to my dismay, guests don’t start showing up until 6:30 or so.  Of course, I’ve prepared the meal to be ready at 6:00 and so by the time we finally eat, it is only a sad imitation of what it would have been if guests had arrived on time.

(Soapbox warning) Personally, I think it is absolutely rude for guests to arrive more than 15 minutes late without calling.  It sends a message that the guest really doesn’t care about all of the trouble the hostess has gone to to create an enjoyable event. There have been several times when a punctual guest and I have had to make small-talk for an hour while we awkwardly wait to see if the other guests are going to actually show up.   And, I think cell phones have made people even worse offenders about punctuality.  I’ve had several guests call me at the time I was expecting them to arrive and say, “We’re just pulling out of the driveway now…we’ll be there in about 10 minutes.”  I know that is darn well impossible if they live 40 miles away!  According to Betty Crocker,

The guest who arrives exactly on time has the blessing of any hostess, but better ten minutes late than ten minutes early!  Nothing is more awkward for the hostess who has her time carefully planned than the arrival of early birds while she is making gravy, feeding children, or racing through her shower.

When I’ve lamented about late-arriving guests to people, the comment is made that I should just tell them to arrive at an earlier time.  I don’t know what the appropriate solution is to late-coming guests.  Perhaps party goods stores have made parties so relaxed because of cute disposible plates, cutlery, table coverings, and decorations that the notion of punctuality has become relaxed, too.  Any polite suggestions are certainly welcomed!

I am hosting our family’s Mother’s Day meal.  My intention is to try to incorporate some of the ideas from this book into my planning.  I sent out invitations using Evite two weeks in advance. According to Betty, there is no hard and fast rule about how far in advance the invitation should be sent but 10 days to 2 weeks is a good rule of thumb.  I like Evite because there seems to be a better response rate than paper or emailed invitations and most people don’t like being called in the middle of the night to be invited to a party.

The Evite also gets around some of awkwardness.  According to Betty, a good hostess extends invitations that include information such as dress (I’m notoriously overdressed at most California parties), if guests should bring something, a map/directions to where the event is being held, who else has been invited, and other information that will be helpful.  For instance, our family dinners are always pot-luck.  In the invitation, I was able to list the dishes that I will be making.  When family members responded, they could see what others are bringing and make their choices accordingly.

One little bit of etiquette that I have been violating is that the hostess always extends the invitation to the other women involved.  It sounds kind of funny.  Betty says that the husband of the hostess can ask a man to save a date and then find out when the best time for his wife to call the other man’s wife to make arangements.  Additionally, when you send a non-engraved written invitation, it is addressed only to the wife.  Hmmm, I’m wondering if this would still hold true with an electronic invitation sent by email.

I know it should go without saying, but double check the date on the invitations.  My parents once sent out a handful of Christmas cards with incorrect information about the date for their annual holiday open house.  To say that it was awkward when the guests showed up a day early would be an understatement!  On the other hand, I’ve received invitations where no date was indicated at all!

Now that I know who is coming to our Mother’s Day family dinner, I can start thinking about the other things that will make the celebration enjoyable.

Share your ideas: How do you handle the non-punctual guests phenomenon?