You are here: Home / Charm School / Beauty / How to Completely Transform Yourself
Disclosure: Some of the links below are affiliate links, meaning, at no cost to you, I will earn a commission if you click through and make a purchase. Thank you for supporting ModernRetroWoman.com!
152 shares 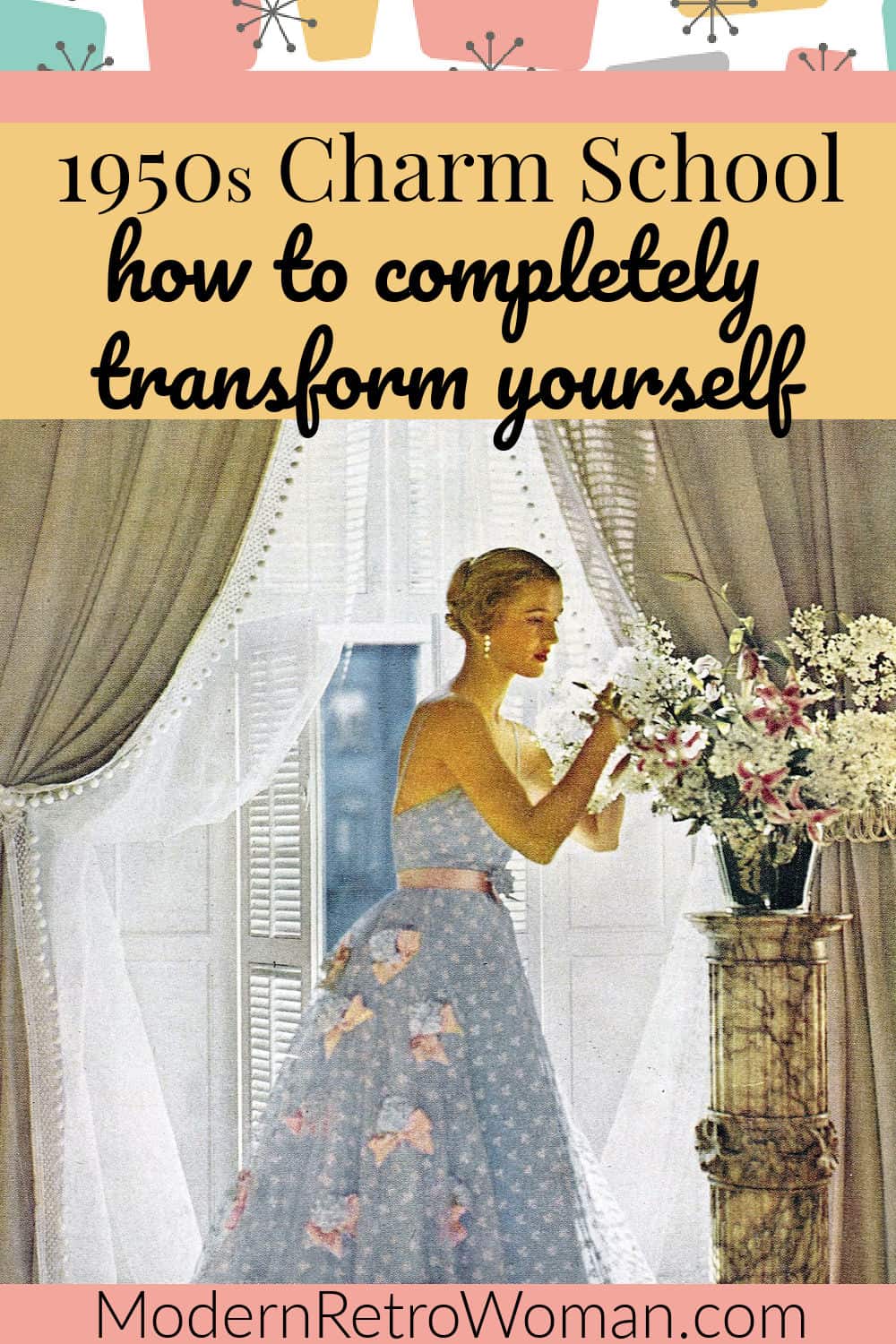 As I have stressed before, beauty is not the result of eye appeal alone.  A woman may become memorable because of her lovely speaking voice.  The inner glows can become a hallmark of beauty.  The woman who has a gift for remembering names has a special foothold on charm.  The woman who writes a sparkling thank-you-note, and never overlooks an opportunity for complimenting others will be remembered when others are forgotten.  Some women are sought after simply because they always have an amusing story to tell.  John Roberts Powers, Secrets of Poise, Personality, and Model Beauty, 1961.

Our mid-century mentor, Mr. Powers, tells us that every woman has a distinctive quality that should be capitalized upon to make her memorable.  I love that he reminds us that beauty is not strictly the domain of outward appearance but it is that certain “something” that comes from within that makes us beautiful.

If you’ve picked up a fashion magazine or read a beauty blog, you’ve probably noticed that the emphasis is on how to overcome your flaws.  Is it any wonder that we’re borderline psychotic about our looks when normal things like wrinkles and cellulite are Photoshopped out of photos?

How to Completely Transform Yourself

Take a stand, right now, and pledge to only focus on what you consider your distinctive qualities (and I mean that in a positive sense).  Remember, how we treat others, having a positive personality, and good grooming have a whole lot more influence on how others view us than whether we use an age-defying eye cream or not.  By only focusing on your distinctive qualities, you will be able to completely transform yourself both in your own view but also in the eyes of others.

One thing I’ve noticed about my college students is that there are two types of young women: confident and insecure.  The insecure ones are always talking about their flaws in hopes of being reassured that the flaw is “no big deal.”  But the reassurances are never enough and the so-called “self-deprecating humor” just comes off as needy and draining.  The confident women, on the other hand, recognize their best features and play those up.  They are not delusional–they work on the “areas that need development” (as one chancellor euphemistically told us during a faculty meeting) but they don’t broadcast that information.  These are the young women who seem so magnetic to those around them.

Your Number One Asset: Your Femininity

Nature has blessed you with your femininity.  That’s your first asset.  The mere fact that you were born a woman makes you something special.  Be proud of your femininity and make the most of it.  John Roberts Powers, Secrets of Poise, Personality, and Model Beauty, 1961.

Mr. Powers describes his high level of respect for ultra-feminine women.  He points out that they are attractive because they regard themselves as attractive, regardless of their physical features.   He said he never heard them make any remark or any suggestion that would put them in any other light.  He recognizes that this kind of femininity is old fashioned (and even more so now) but that there are benefits to showcasing your femininity.

When I was a young woman starting out in life, my peers and I suffered from what I now call The Fake Man Syndrome.  We were told that in order to be successful in our careers, we had to dress like men (which is why you see women wearing all of those dreadful ties) and we had to act like men by being aggressive and taking no prisoners (which led to the B*tch Boss stereotype) because the traits and insights that women brought to the table were not valued (we were told).  However, as Mr. Powers tells us,

…A woman will be infinitely more successful at realizing her ambitions if she proves herself as a woman, not as an imitation male.

Much to the horror of one of my female professors, I refused to give up my ultra-femininity as I made my way through graduate school.  Ironically, she was the only one who gave me push-back for embracing my feminine self.   I wasn’t girly.  I was a grown-up ambitious woman who felt that being a woman gave me a professional perspective that the men didn’t have.

Your number one asset is your femininity and being a woman.  Run with it.

Have you completely transformed yourself by focusing on your distinctive attributes? Share your experience in the comments.

To Your Fabulous Technicolor Life!