You are here: Home / Technicolor Life / Inspired Life / I Just Can’t Take Anymore
Disclosure: Some of the links below are affiliate links, meaning, at no cost to you, I will earn a commission if you click through and make a purchase. Thank you for supporting ModernRetroWoman.com! 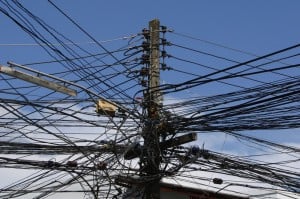 We live in a culture of over-stimulation.  Or, should I call it hyper-stimulation?  I began thinking about this while I was standing in line at the bank.  In addition to the usual late Friday afternoon busy-ness, there was a big screen television tuned to CNN mounted from the ceiling so that we could watch it while we waited the three minutes for our turn at the teller window, there was upbeat music playing in the background, and, of course, cell-phones ringing and people talking (shouting?) into them.

I live in Los Angeles where there is an ongoing battle between City Hall (after intense nudging by citizen groups) and outdoor advertising companies.  There are illegal billboards all over the place…including ads that have “moving displays” and vinyl “super graphic” ads covering entire multi-story buildings.

I can’t just go out to a quiet dinner with my husband anymore.  No, my meal has to be fun and entertaining!

I can’t just drive down the street.  No.  Now my car is supposed to turn me on when I turn it on.

And the list goes on (including how my new range has to beep at me when I turn it on or off or set a temperature or…–how did I EVER cook before without all of that beeping?)

As modern retro women, we should be very concerned about this hyper-stimulation because it causes sensory overload which leads to increased levels of stress,  feelings of overwhelm and simply being burned out. Some even believe it leads to adrenal exhaustion (but there isn’t any convincing evidence of it, yet).   And when we are in this state, our ability to focus and interact with others is greatly reduced.   Ironically, many of us retreat into technology that provides over-stimulation–which produces the level of adrenaline we are used to having– while shutting out the outside world.

The first step is to be aware of how much stimulation is being shoved into our minds and bodies.  Because we become habituated to the stimulation, we stop recognizing it as a source of our stress and overwhelm.  Once we are aware, we can start taking control of our own minds again by reducing the stimulation.  For my husband and me, that meant deciding to unplug the television from the outside world.  It meant no longer participating in the “instant news cycle” of the internet and relying on the newspaper for most of our news instead (the instant news cycle has a tendency to make everything seem hyper-important…there’s a lot of non-news being thrown at us as being urgent).  It means we exercise by walking in parks instead of going to a “fitness center.”  It means that we try to disengage from what our culture says we have to do and be mindful of what we believe is right for us.