You are here: Home / Technicolor Life / Inspired Life / I’ll Take Corny Any Day
Disclosure: Some of the links below are affiliate links, meaning, at no cost to you, I will earn a commission if you click through and make a purchase. Thank you for supporting ModernRetroWoman.com! 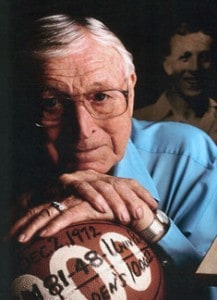 “Coach” passed away on June 4th and I’m taking it pretty hard.  Perhaps it is because UCLA basketball legend John Wooden’s passing was just days after the anniversary of my own father’s death–a man who also coached hundreds of young men to be better than they thought they could be both on and off of the field–I am feeling the loss more deeply than I would have otherwise.  Perhaps it is because, during my time at UCLA, I saw his impact on a generation of students who never saw his teams play that I developed a deep appreciation for his role as a teacher…and he always viewed himself as a teacher first and foremost.

I had never heard of Wooden’s Pyramid of Success before working at UCLA.  I don’t know how I missed it but it resonated with me deeply when I first saw it.   It seems to encapsulate the values I try to live by and and strive to achieve.  At first glance, many people call the pyramid corny and out of touch because it was developed during the middle-20th century (Click here for a memorial written by Gail Goodrich about his reaction to the pyramid on the first day of training at UCLA).  And, yet, it was this corny road map that enabled his athletes and others who followed it to be highly successful in life.

In this day and age where cynicism and narcissism seem to rule the day, I’ll take a corny road map to success any day over anything that is offered today!