You are here: Home / Just for Fun / Fiction / Independence Day
Disclosure: Some of the links below are affiliate links, meaning, at no cost to you, I will earn a commission if you click through and make a purchase. Thank you for supporting ModernRetroWoman.com!
45 shares 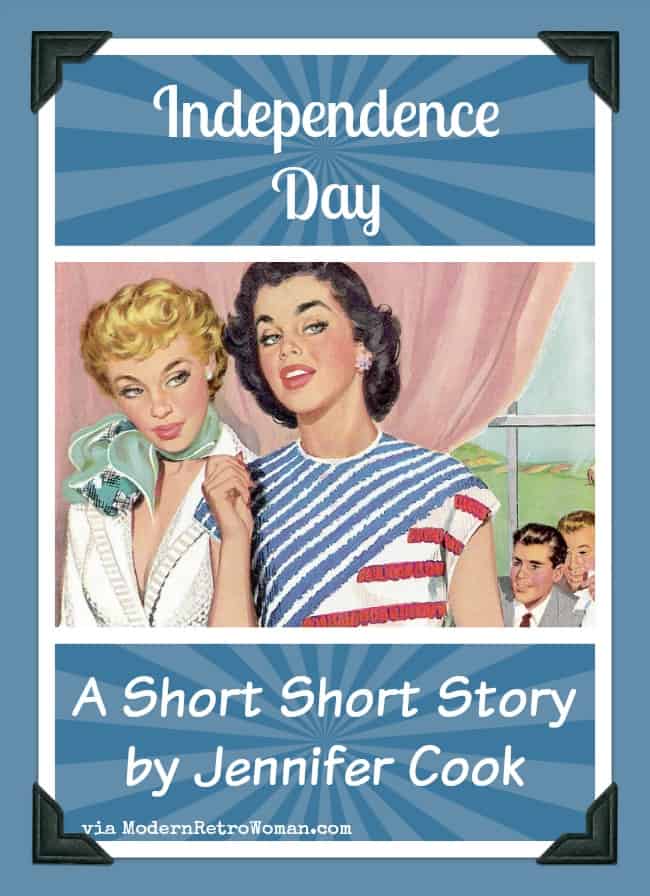 “That’s it,” Rose stared at the mirror. “I’m done being the perfect daughter, sister, friend, ex-girlfriend.” She plopped down on her bed. “It gets me nowhere. I mean seriously…who gives a hug to the man breaking up with her?” She thought back to six weeks earlier, Robert trying to let her down easy. She wouldn’t dare let him see her upset. “Ugh!” She put the pillow over her head screaming into it.

She couldn’t hear the knock on the door and was surprised when her mother lifted the pillow. “Are you finished?” Her mother never showed emotion.  Rose threw the pillow to the floor and abruptly stood up. Old Rose would have composed herself.   Not new Rose. Her mother opened her closet. “We’ve been invited to the McAllister 4th of July party. I don’t need to remind you what this invitation means to your father and me.” She moved some clothes around. “You may want to go shopping.” Her mother left the room.

“Oh I’ll go shopping!” Rose said, as if she was brave enough to say it to her mother’s face. Since she had nothing else to do she got in her car and drove off. By the time she got home two hours later, Rose was all smiles.

“Did you get something for the party,” her father asked, not bothering to look up from his paper.

“Sure did,” Rose responded.

Two days later Rose’s parents were determined to be prompt to the social event of the year. Rose had invited her oldest friend, Maggie, and would pick her up separately. “Please don’t be late,” her mother fixed her makeup in the foyer mirror.

“Getting dressed right now. See you soon.” As Rose walked down to her bedroom she shuddered at the outfit she was about to put on, but she knew there was no other way to make her point.

Twenty minutes later she was in Maggie’s driveway honking. “I’m here!” Maggie yelled, looking annoyed. She opened the door. “Why are you being…?” Maggie stared at Rose. “Please tell me that’s not what you’re wearing to the McAllister’s.” Maggie was in a prim and proper dress. Something old Rose would have been in.

“Yep. Let’s go!” Rose sped away. She could tell Maggie was disgusted, but wouldn’t say anything further. She knew Maggie would hate walking into the party next to her, but she wouldn’t have a choice. After hearing that Maggie told several people that Rose was never good enough for Robert, Rose was more than happy to embarrass her so called friend.

The valet took Rose’s key. She walked up the broad stairway with her head held high. She could feel the stares as she entered. Her mother’s gasp made her smile. She walked away from Maggie and found June McAllister in a low cut white sweater. The two struck up a conversation, and Rose reveled in the attention she received.

“That is the most hideous sweater I’ve ever seen!” her mother grabbed her elbow.

“I know, Mother.” Rose smiled and walked away.