You are here: Home / Home Ec 101 / Home Cooking / Recipes / Vintage Recipe / Is This Recipe a Keeper? Smothered Hamburg Patties
Disclosure: Some of the links below are affiliate links, meaning, at no cost to you, I will earn a commission if you click through and make a purchase. Thank you for supporting ModernRetroWoman.com! 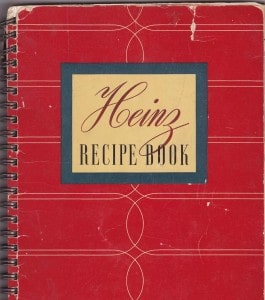 Did you hear a squeal of delight emanating from Los Angeles the other day?  It was me.  I checked my mailbox and there was a big envelope with my name on it from my former-student-turned-friend Erica (as an aside, I already told my higher ups at the graduate university that if anything happens to me, Erica could probably step into my place teaching the workshops without even skipping a beat…but I digress).

I greedily tore open the envelope and beheld the 1939 Heinz Recipe Book (with War Supplement).  I thought I’d died on gone to heaven (except that I had a ton of homework waiting for me to finish so I knew that I was still on earth.

The Mister told me last week that his favorite food is a hamburger.  So, I eagerly looked for a recipe that I could try that would fall into the hamburger category and I found “Smothered Hamburg Patties.”  One thing I’ve noticed in the vintage cookbooks is that hamburgers 60-70-80 years ago were very different than what we call hamburgers.  There were rarely any buns and they were often called “chopped sirloin patties” or some variation of that.

Note: I’m giving the original recipe that serves 8 but I cut the recipe in half when I made it because there are only two of us… 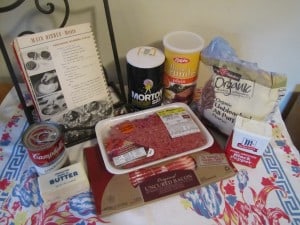 Form into 8 flat cakes, then surround each with a slice of bacon.

Dip patties in flour and brown in small amount of fat.

Cover tightly.  Bake in a moderate oven (375º F.) 30 to 40 minutes.  Pour off excess fat and thicken gravy if necessary.  Arrange patties on heated platter, then pour gravy over top and garnish with parsley.  (Serves Eight) 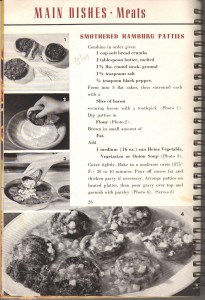 If Heinz still makes soup, it isn’t available at my local grocery store.  I used onion soup because the vegetable soups had high fructose corn syrup in them (and we’re trying to avoid HFCS).  The downside was that the soup made it a bit saltier than we like…not oppressively so, but just a bit saltier than we normally eat our food.  The next time I make this, I will probably eliminate the canned soup and just caramelize my own onions with a bit of garlic and add some low sodium beef or vegetable broth.  I will then pour that over the patties before baking.

For waist watchers, this isn’t exactly a low calorie food.  That said, the patties could be made A LOT smaller and still be satisfying.  I was surprised by how large and filling these patties were.

Is this recipe a keeper? YES!