You are here: Home / Home Ec 101 / Home Cooking / Recipes / updated vintage recipe / Modern Retro Recipe: Goblin Frosties
Disclosure: Some of the links below are affiliate links, meaning, at no cost to you, I will earn a commission if you click through and make a purchase. Thank you for supporting ModernRetroWoman.com!
I was looking through my vintage cookbooks for a fun Halloween dessert (that didn’t involve a pumpkin) when I came across these adorable guys.  Using oranges instead of pumpkins, you create little jack-o-lanterns using cloves, licorice, and maraschino cherries and fill them with lime sherbert. 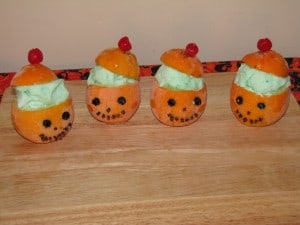 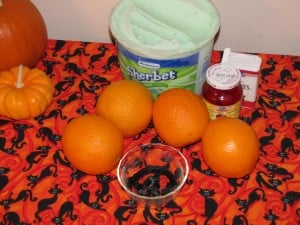 With a sharp knife, cut off thin slice of peel from bottom of orange to enable it to stand firmly.

With spoon, scoop out pulp and membrane from the orange (this is easier with a fruit spoon).

Using a toothpick, poke holes in the peel where you will want the mouth and nose to go.  Stick the cloves in the holes you just made.

With the point of a paring knife, cut two holes for the eyes.  Carefully insert the cut licorice whips into the holes you just made.

Fill oranges with sherbet, mounding it above the rim.

Place the lid atop the sherbet at a fun angle. Attach maraschino cherry through each lid and into the sherbet with a toothpick (which also acts an anchor for the lid).

Keep frozen until ready to serve.

When I was doing the photo shoot for this recipe…or, I should say, I was attempting to do the photo shoot…it was over 100F degrees outside and not much cooler inside.  The poor goblins were having a hard time holding their sherbet….

I stuck them  in the freezer and we tried it again a few days later.  They were much, much happier, then (until they found out about the horror that awaited them…we won’t discuss that…).