You are here: Home / Technicolor Life / Wise Words of the Day / Do You Need to Overcome A Fear of Failure?
Disclosure: Some of the links below are affiliate links, meaning, at no cost to you, I will earn a commission if you click through and make a purchase. Thank you for supporting ModernRetroWoman.com! 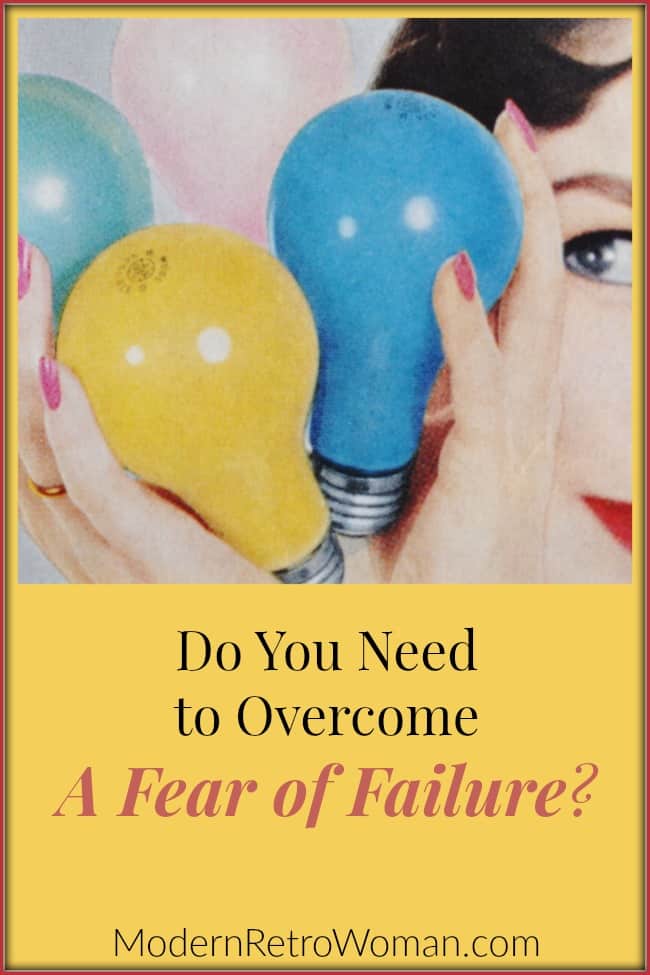 Successful men usually snatch success from seeming failure. If they know there is such a word as defeat they will not admit it.  They may be whipped, but they are not aware of it.  That is why they succeed. ~ A.P.  Gouthey

Do you need to overcome a fear of failure?  Is that fear keeping you from going after your dreams?

It seems like “failure is not an option” is constantly being drilled into us by our modern society.  But what if, instead, we begin to look at failure as an option?  As something to encourage because of the information it provides?

One thing I’ve noticed about modern women is that we seem paralyzed by our “fear of failure.” As a result, we don’t venture too far out of our safe zone.  Maybe it relates to the Imposter Syndrome where we are afraid that people will find out that we really don’t deserve our success or don’t know what we are doing (although we really do deserve our success and/or know what we are doing).

But not taking any chances because of our fear of failure can have a toxic effect on us.  Without realizing it, it can start diminishing our self-confidence.  Without that knowledge that we can overcome failure, we lose our resiliency.  We don’t even try to learn new things such as how to knit in three! easy! steps!

Now, I’m not advocating going bonkers and engaging in self-destructive high risk behaviors.  What I am saying, though, is that we should view failure is simply information gathering and not a value judgment.

It is said that Thomas Edison conducted over 3,000 experiments in his effort to get a working electric light bulb.  Note that he said experiments, not that he had failures.  In his mind, it was all just part of the process toward success.

Here is the deal: If we aren’t failing, we aren’t taking risks that enable us to achieve our goals.

Where does fear of failure show up most often in your own life?  How do you overcome that fear?  Share your thoughts in the comments.

To your fabulous Technicolor life!