You are here: Home / Just for Fun / Fiction / One Giant Leap
Disclosure: Some of the links below are affiliate links, meaning, at no cost to you, I will earn a commission if you click through and make a purchase. Thank you for supporting ModernRetroWoman.com!
27 shares 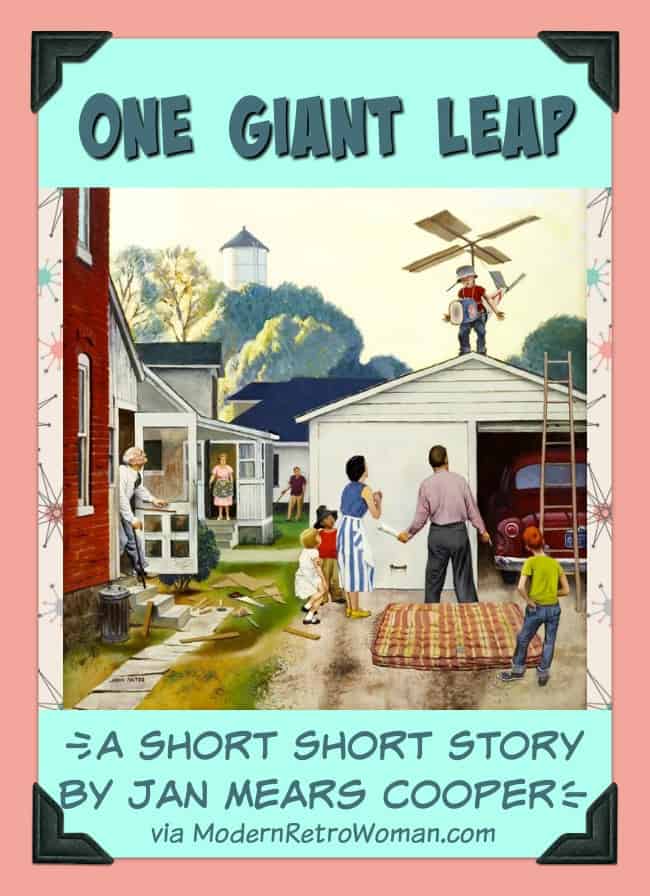 Colonel Thomas “Mac” McKinnly, watched the rocket engines ignite. His hands clenched behind his straight back, expression stoic. He could feel the pity in the room even though no one made eye contact. Nothing revealed the disappointment as his dreams shot into space, without him.

His commander had broken the news to him earlier; due to an inner ear infection, they scratched him from the mission. “The next one,” they promised.

Ground control cheered as the ship broke through the atmosphere. He watched with envy as his crew headed for the moon. He wondered how TJ handled the news of his grounding. The kid idolized him, and he hated letting him down.

Mac took a seat and put on his headset. It was time for him to guide his men through the next phase. Next time, he promised himself. Next time it’s my turn to fly.

“Thomas McKinnly Jr, you get down from there, this second.” TJ grinned down from the top of the garage. He pretended he didn’t hear his mom yelling from the kitchen window. She didn’t understand his need to fly. But Pop did. And even though they pulled Pop from his moon mission, TJ still believed in him. Together, they built the aircraft from scratch, and it was time to try it out. He strapped the propellers to his back with a belt, and they stirred above his head in the breeze

His heart raced as he backed up to the opposite edge of the roof.

“TJ,” his grandmother yelled. He paused. Grandma had a way of making people listen. He walked back to the front.

“You need a mattress for your landing.” He smiled. Grandma had the spirit of adventure in her.

“He’s going to get hurt doing that.” His mom came out of the house wiping her hands on a towel.

Grandma waved her concerns away, “Oh, nonsense, he’s a McKinnly, and they’re a tough lot.”

He watched as they dragged a mattress out to the driveway. “TJ, wave and smile.” He did as told, and his mother took a picture.

TJ once again backed up, counted down as he ran across the roof and leaped into the air…

Commander Elizabeth McKinnly’s heart raced as the countdown began. She was fulfilling the dreams of three generations. Tucked under her shirt were two pictures both taken sixty years ago: Grandpa Mac in his spacesuit, holding his helmet and her dad as a kid on top of a garage, ready to jump.

Grandpa Mac died earlier that year. He never made it to the moon because the Apollo program ended. She knew he’d be proud that a McKinnly was finally space bound. Her dad, on the other hand, didn’t say much when he heard she was piloting the Mars Explorer III. His dreams of space travel died the day he jumped from the roof. Shattered bones kept him Earthbound.

Elizabeth smiled, they were flying.

Dr. Julie-Ann’s comment: When I first saw this illustration, I immediately thought of my younger sister, Jan, because she was always jumping off of things trying to fly.  I showed it to her and, not surprisingly, the image resonated with her.  I was delighted that she decided to write a short, short story inspired by the Young Astronaut illustration.