You are here: Home / Home Ec 101 / Entertaining / Successful Entertaining: Hostesses Are Born AND Made
Disclosure: Some of the links below are affiliate links, meaning, at no cost to you, I will earn a commission if you click through and make a purchase. Thank you for supporting ModernRetroWoman.com!

In this changing world, elegance, formality and well-staffed homes are no more our way of life than grandfather’s surrey with the fringe on the top.  Instead, informal living and informal entertaining have forced their way into our existence….Cultivate the art of entertaining informally and the pleasant relaxed manner it commends ~Carolyn Coggins, Successful Entertaining at Home: A Complete Guide to Informal Entertaining, 1952. 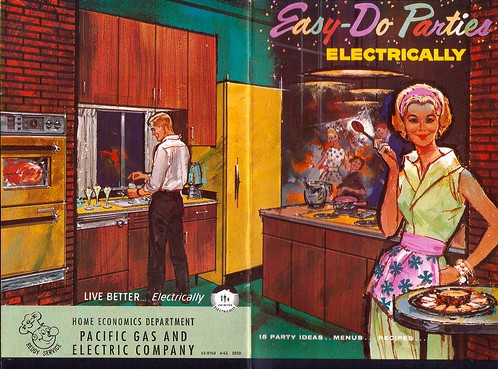 Our apartment in New Jersey was designed for entertainment.  At least, that’s what the floor plan brochure that the rental agent gave us implied.  Off to one side, was an illustration showing an enormous basement where kids were playing ping-pong on one end and adults were involved in a cocktail party on the other end.  The illustration worked.  I had visions of frequent soirees dancing in my head as we signed the lease papers two weeks before we made our late autumn transcontinental move from sunny California to chilly New Jersey.

Apparently, The Mister had visions of his own and our party basement became a much more practical studio on one side and home office on the other (the finished part of the basement wasn’t really as large as in the illustration…half of it was an unfinished storage room…we knew this before we signed the lease).  So much for the soirees!

When Mrs. Coggins was writing her book, there weren’t cable television shows putting together an entire party within 30 minutes (you have to wonder what they were doing during commercials to accomplish this feat).  I think this phenomenon has put incredible and unrealistic pressure on us to be perfect.  We don’t have to be perfect.  We just have to put our thinking caps on and do what Mrs. Coggins tells us:

Informality at its best requires more common sense than servants.  There always has been a dearth of thinkers, so if you have a first-class, usable mind, put it to work on your home.

The holiday season is rapidly approaching.  For the next few months, we will spend our Tuesdays using Successful Entertaining at Home: A Complete Guide for Informal Entertaining by Carolyn Coggins (1952) as our guide for becoming capable hostesses whether it is for a tailgating party or Christmas Eve dinner.

Do you have a hostessing role model?  What made her stand out from others as a hostess?

To your capable Technicolor entertaining!