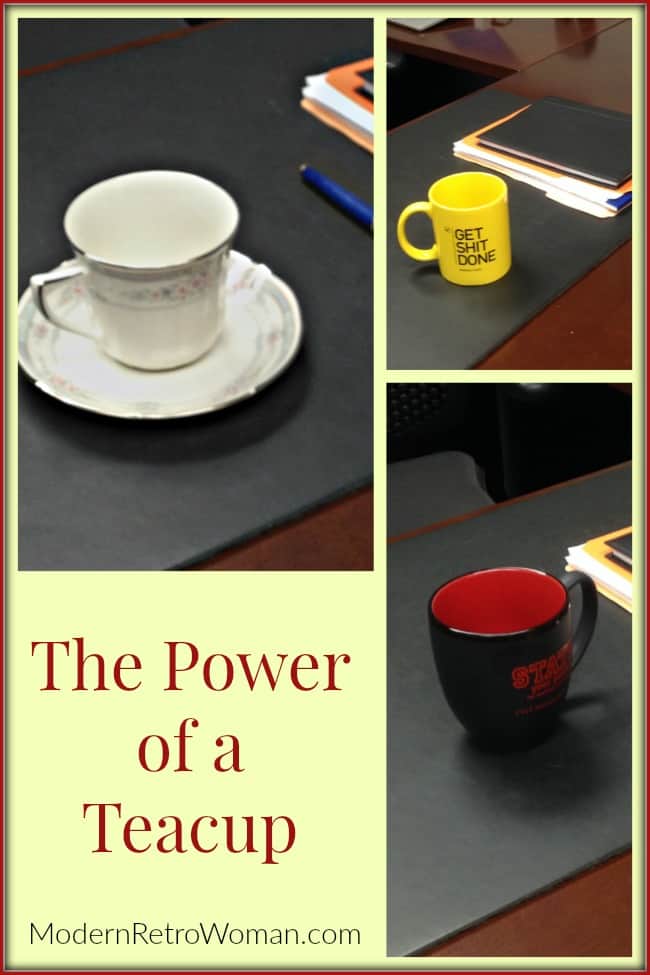 I started using a fine china cup and saucer at work.  You’d think it was just a teacup, right?  But in truth, it was actually a powerful statement, a line in the sand, the moment when I finally “came out” to my colleagues.

I didn’t say anything.  I just started using it.  The teacup was simply on my desk filled with the tea that I was drinking.

But it was noticed.

Some people didn’t know if they should say anything.  A few said they thought I was really brave.  Others expressed profound joy at seeing it.

Overall, the response has been very positive and I know I’ve inspired at least one other person to do the same.

But I didn’t start using it for others.  I began using it for me.  And, as odd as it may seem, it has been a defining moment and I feel rather liberated.

I finally had the courage to say to the world, “I am the kind of person who enjoys using china…even at work.”

How did using a teacup happen?

A few months ago, I read Something From the Oven by Laura Shapiro* (hat tip to Maria for recommending it!).  In it, Ms. Shapiro discusses how early to mid-century women’s magazines and advertisers promoted the idea of gracious living.

I realized that that is the ideal I have been seeking.  The phrase gracious living is the embodiment of all that I have been writing about for all of these years.

The Mister and I talked about what gracious living means to us.  It means living by a set of values and ideals that are often cast aside in today’s modern world. What it all boils down to for me is a desire to embrace beautiful living–to eating good food, Only Wearing Beautiful Clothes™, exercising my body on a regular basis so that I can move through the world easily and effortlessly, creating a peaceful and inviting home, developing my poise so that I can find ways to make other people feel important and special to me, and nourishing my creativity.

This meant I had to stop trying to conform to the norm of my work environment and community.  It’s not that the norm is bad in and of itself.  But it wasn’t authentic to me.  It was crushing my identity.  And my soul along with it.

And so, the black mug with our department’s logo on it needed be put away.  And the aggressively rebellious yellow mug given to me by an appreciative faculty member no longer felt playful because it didn’t represent the kind of person I want to be.

The teacup made from fine china quietly made its appearance.

Because I am the kind of woman who enjoys gracious living.

*If you click on this link and buy a copy of the book, Amazon gives me a small commission.  Thank you for supporting my blog! 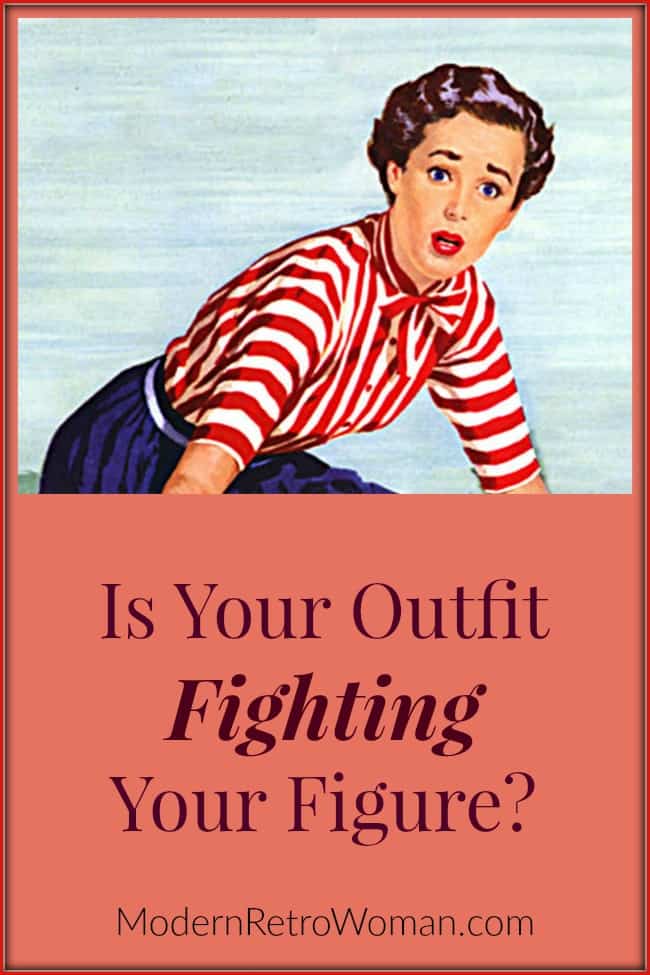 Seeing is believing; but when you look at lines, seeing is deceiving…Optical illusions do not confine themselves to such things as squares and top hats; they can happen to you.  They do happen, in fact, when the lines of your clothes mingle with those of your figure and when hat and coiffure shapes come in contact with your face.  They can happen for better as well as for worse, and our concern…is to make sure in your case, the lines of clothes contrive to fool the eye in a way that shows your figure at its best. ~Emmi Cotton, Clothes Make Magic, 1949.

I have an hourglass figure.  No matter how much I weigh, my waist is usually about 10″ smaller than my bust and hips.  If I wear a “boxy” style top, I look about 10 pounds heavier than I am…and it is all because of optical illusion created by the line of the top.  Conversely, garments that are too tight can break up the line of an otherwise flattering garment.  Our “what to wear” mentor, Miss Cotton, tells us that we can give a nod to fashion but we must honor the best lines (optical illusion) for our figure within the fashion trends.

We will examine the best lines for the different figure types in future lessons, but today Miss Cotton wants us to look at optical illusions:

We can use the line of a garment to create optical illusions.  For instance, the reason we love those 1940’s suits and dresses so much is because they created an optical illusion of smaller waists (even without girdles) by subtly extending/emphasizing the shoulders .  In fact, I learned while earning my custom clothing certificate that better quality clothing will often use shoulder padding or shaping to help with the line of a garment.

When The Mister is teaching his figure sculpting class, one of the things he emphasizes is the use of lines that force a viewers eyes to move around the figure to the best advantage.  In Michelangelo’s “Pieta,” our eyes are forced around the sculpture by the draping of the fabric and the angle of Christ’s body.  Even Mary’s hand helps create an illusion of an extended line at the bent knee.

In much the same way, we will be learning how to use optical illusion to create lines that flatter our figures.

Miss Cotton ends this lesson with two points she wants us to remember:

There are two things I want you to keep in mind…The first is that without good posture no figure can look its best, nor can the most becoming of clothes work efficiently for figure flattery.  Cultivate good posture, if you don’t have it; it costs nothing but effort, but the lack of it costs dearly in loss of beauty, poise, and vitality.  The second thing to remember is this: if you are overweight or have a figure imperfection, don’t wait until you’ve lost ten pounds or remedied the defect to wear more becoming clothes; start improving your figure now, the line way.  It will help you accomplish your objective in half the time, because the better your figure seems to be, the better you are going to want to make it.

How have you used optical illusion to your advantage when choosing garments?

To your flattering Technicolor life! 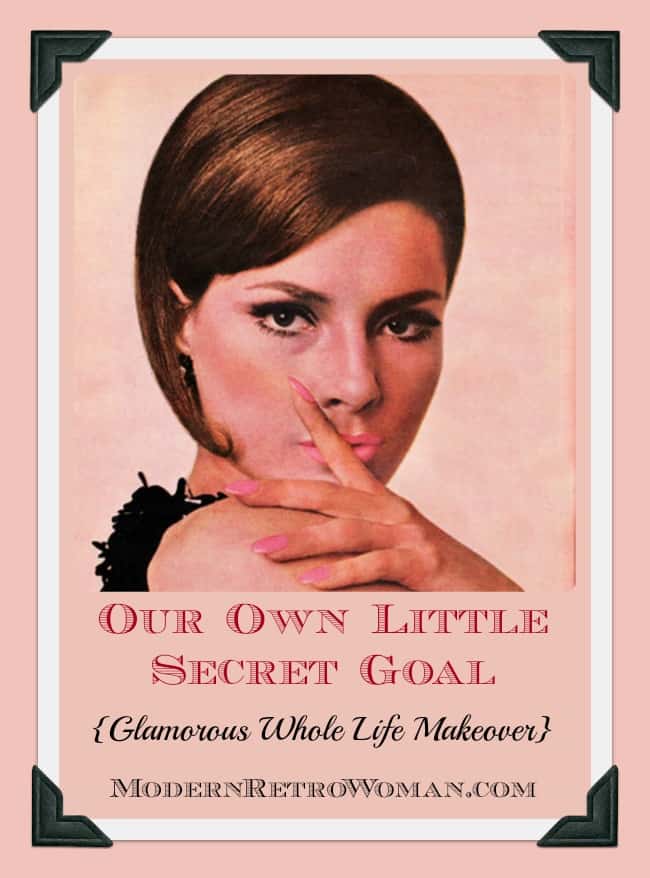 How many times have you shared a goal with someone so that you could be held accountable?  Most goal setting gurus encourage you to tell someone about your goals to increase the likelihood that you will achieve it.  And that is usually good advice–I follow it when I am coaching faculty and ask them what they will accomplish before my next meeting with them.

But sometimes sharing our goal with another person backfires on us.  Instead of supporting us, the person we chose as an accountability partner actually ends up being a saboteur.  There may be many reasons for this sabotage, many of them well meaning at their core.

Glamour goddess, Eleanore Brodie King writes in her 1941 master’s degree thesis, A Course in Personal Presence (University of Southern California), that it is actually more prudent not to let others know about our journey.  Mrs. King notes that we will feel awkward and clumsy as we develop these new skills–much the same as when we are first learning anything.  She points out that by keeping the journey a secret, we take the pressure off of ourselves and can take the time we need to master various aspects of poise, charm, and glamour.

Sadly, I almost abandoned this journey because of the pushback I was getting from other women.  I was told that I’m not a “true feminist” because focusing on glamour, poise, and charm is too superficial.  I’ve also been told that I’m not a “good enough” Christian because I am denouncing the image I was created in.  And, alas, there is a certain “look” that academic women are supposed to conform to and being glamorous doesn’t conform to that expectation that smart women don’t care about how they look.

But to heck with them! This is something I want to do, for myself, and for the people around me.  This is about me reclaiming my feminine power that our culture seems to devalue so that I can be a self-actualized person.

So, we will keep our journey our own little secret.  We don’t have to tell anyone else what we are up to as we go about developing our own version of poise and charm.  And before we know it, others will just assume that we’ve always been fabulously glamorous! 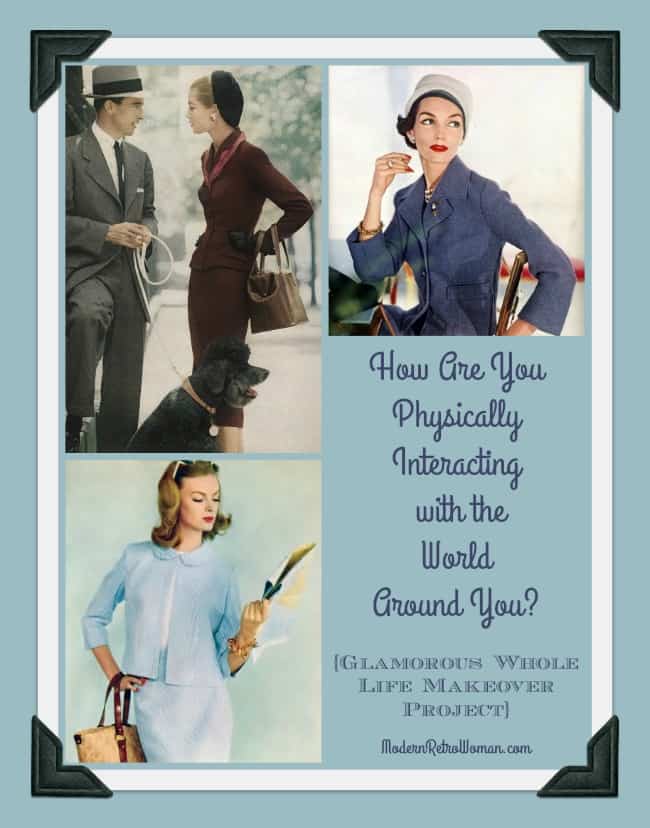 In my “magical pony land,” I glide through life–always so graceful that people are entranced by my effortless elegance.  Alas,  as much as I’d like to move like Audrey Hepburn, the truth is very different.  I have a feeling that I  currently galumph my way through life.

Working at a university with about 20,000 students, I have a chance to engage in some serious people watching as I walk around campus. It is quite intriguing to see the different ways students and professors walk.  Some trudge, some walk briskly, some stroll, and some are so focused on their cell phones that they are unaware of the people they are about to run into. I can’t help but make guesses about them based on how they are walking.

Last week, I asked you to become aware of the food you eat.  This week, the focus is on how you physically interact with the world.  Do you hold your head high or do you slouch and keep your eyes cast down as you walk?  Or, are your eyes glued to your phone as you walk into oncoming traffic?  How do you sit when you work?  Do you hunch over your keyboard?  What is your body language while you in meetings?  What about at home?

As before, no judgment is allowed.  You are simply trying to establish your baseline so that you can see what behaviors need to be changed down the line.

Do you glide with effortless grace or do you currently galumph your way through life?  How do you physically interact with the world around you?