You are here: Home / Home Ec 101 / Home Cooking / Recipes / Vintage Recipe / Take That, KFC!
Disclosure: Some of the links below are affiliate links, meaning, at no cost to you, I will earn a commission if you click through and make a purchase. Thank you for supporting ModernRetroWoman.com! 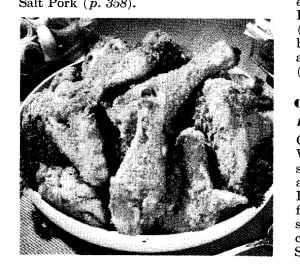 Like a lot of people, I love fried chicken.  Despite my family raving about my chicken, I always thought that it was a little dry (especially if I cooked it without the skin and bones) or that the crispy coating was a little too burnt.  My basic “go to” recipe was an oven fried variation from the 1970’s edition of the Betty Crocker Cookbook that I received when I was a teenager.  Basically, after the chicken was dredged in flour, it was baked in 13″x9″ pan (1/4 c. shortening and 1/4 c. butter melted in it before adding chicken) at 425* F. for 30 minutes each side (60 min. total).  It is an easy method and doesn’t require me to constantly watch it to make sure it doesn’t catch fire (or burn).

I’ve also soaked the chicken parts in buttermilk overnight to infuse the chicken with moisture and flavor before dredging it.  But, alas, it still seemed to be missing that “something.”

And then the clouds parted and I found the answer in my World War II-era Betty Crocker cookbook: Braised Chicken.  It is like a cross between stove-top and oven frying but also retains an amazing amount of moisture.  I had some leftovers on the table when a couple of My Honey’s buddies came over to help him move some shop equipment.  Within a couple of minutes of one trying a wing, the rest of the leftovers were gone and they were looking at me like sad puppies wanting more.  The great thing is that this recipe is soooo easy that if I had some more chicken in the fridge, I could have whipped up some more for them! 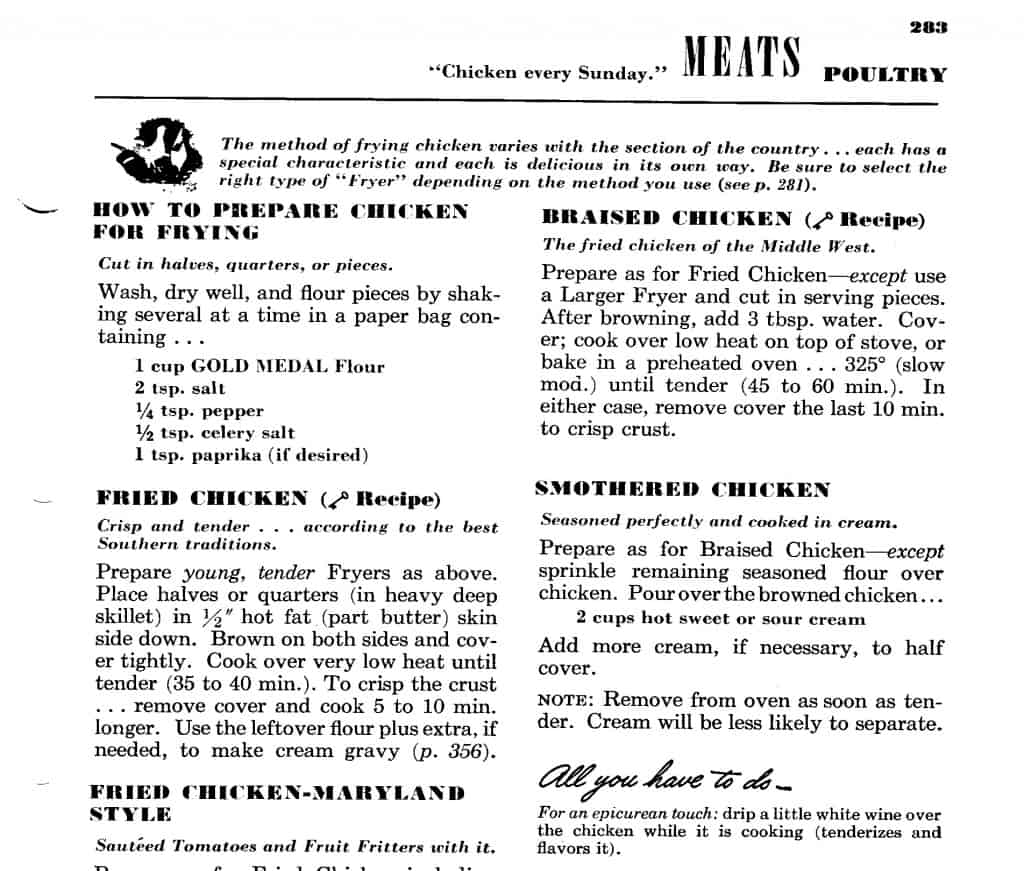 Wash, dry well, and flour pieces by shaking several at a time in a paper bag containing…

Place chicken in heavy deep skillet (I use a cast iron) in 1/2 inch hot fat (part butter), skin side down.  Brown on both sides and cover tightly.

After browning, add 3 Tbs. water.  Cover; cook over low heat on top of stove or bake in a preheated 350*F oven until tender (I chose this option), about 45-60 minutes.  Remove cover the last 10 minutes to crisp crust.

*Yes, I realize that these are two different types of cooking methods but I think it is the switching from the frying to the braising and then back again that makes this so delicious and means that KFC will be getting a run for its money.