You are here: Home / Home Ec 101 / Meal Planning / The Science of Menu Building Or Balancing the Ration–1935
Disclosure: Some of the links below are affiliate links, meaning, at no cost to you, I will earn a commission if you click through and make a purchase. Thank you for supporting ModernRetroWoman.com! 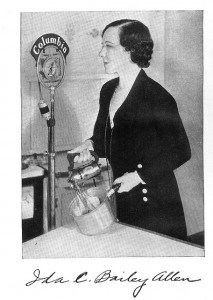 This is the time of year when people make a resolution to lose weight or at least eat right and exercise.  I thought it would be interesting to spend a few days sharing with you some of the guidelines our grandmothers were encouraged to follow to ensure proper nutrition for their families.

Ida Bailey Allen, in her cookbook Cooking, Menus, Service also published as Modern Cookbook (c. 1924, 1935) spends 43 pages explaining the proper foods to eat for a healthy diet (this was before “diet” meant “menu to lose weight).  Mrs. Allen is one of those influential women that we never know about.  She was a radio cooking show pioneer, wrote more than 50 cookbooks and, according to her obituary in the July 30, 1973, edition of Time Magazine, believed that “good home cooking was an antidote to the rising divorce rate.”  (I also want to note that this is the cookbook that got me started on collecting vintage cookbooks.)