You are here: Home / Home Ec 101 / Home Cooking / Recipes / updated vintage recipe / Tuesday Tasting: Pork Chop Escallop
Disclosure: Some of the links below are affiliate links, meaning, at no cost to you, I will earn a commission if you click through and make a purchase. Thank you for supporting ModernRetroWoman.com! 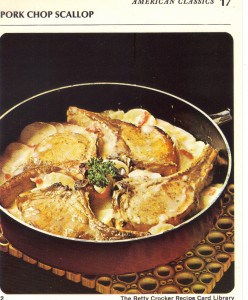 Are you tired of turkey, yet? I bought a pasta salad at the school cafeteria, yesterday, and discovered that the meat on the top of it was turkey and not chicken like usual. It made me wonder how old it was!  I decided that I would share a pork chop recipe with you today instead of the usual “holiday fare.”

If you remember, I shared with you back in September that I had come across the orange 1971 Betty Crocker Recipe Box that my grandmother had given to me.  My local supermarket was having a sale on pork products so I decided to give the “Pork Chop Scallop” recipe from the box a try because it looked so very easy.  It only has five ingredients!

The directions included instructions to brown the chops, remove them, put the scalloped potatoes mix into the skillet (following box directions), placing chops back on top and then simmering for 30-35 minutes.  Easy.

But less than satisfying because of the potatoes. 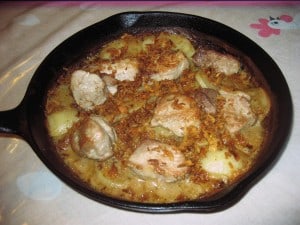 So, I decided to “downdate” the recipe (is that the opposite of updating?) so that it is made entirely from scratch.  And it was just as easy but a whole lot more satisfying.  I adapted the recipe for escalloped potatoes  from The Modern Family Cookbook by Meta Given (1953).  My pork loin chops were huge and boneless, so I cut them into serving sizes.  As you can see from the photo, even though the recipe calls for four chops, you could easily add many more if they fit into your skillet.

By the way, according to Dictionary.com, escallop means “to bake (food cut into pieces) in a sauce or other liquid, often with crumbs on top; scallop.”    My version has you simmering the pork chops and potatoes instead of baking but if you decided to be a “purist” and bake this casserole, you could bake it, covered, in a moderate 350º oven for about 30 minutes.

Have you ever “downdated” a recipe?