You are here: Home / Technicolor Life / Inspired Life / Gratitude / We Express Our Gratitude – Remembrance Day
Disclosure: Some of the links below are affiliate links, meaning, at no cost to you, I will earn a commission if you click through and make a purchase. Thank you for supporting ModernRetroWoman.com!

“As we express our gratitude, we must never forget that the highest appreciation is not to utter words, but to live by them.”   – John F. Kennedy 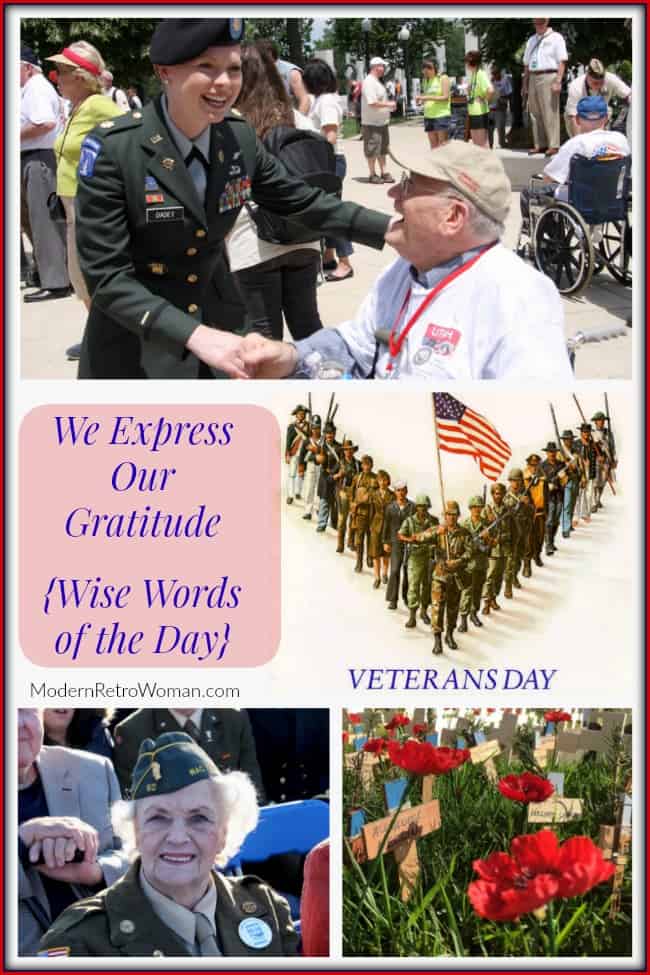 For the past year and a half, we have endured the most divisive presidential election in the history of the United States.  Emotions are running quite strong with the realization that Sec. Clinton didn’t win, as the pollsters predicted, but Mr. Trump is our president-elect.  Social media is on fire with more divisiveness regarding the election.

I’d like to take this opportunity to thank our military veterans.  You see, no matter where we fall on the continuum regarding the outcome of the election, every veteran I know has told me that they served our country to secure our rights—including our right to vote for the candidate we support and to disagree with our fellow citizens without the fear of being thrown into jail as a political prisoner.

If you know a veteran–and almost everyone does because we’ve been at war for 15 years now–take a moment to listen to their stories today.  And thank them for believing in our American values so strongly that they were willing to sacrifice their own life.

Remember, deep down, we all want the same things: To love.  To be loved.  To feel valued.  To feel heard.  And to feel safe.  (And the secret desire to act out the “Towanda Parking Lot Scene” from Fried Green Tomatoes ). We just have (sometimes very) different opinions on how we accomplish those things.

Middle right:  In Honor of our Veterans courtesy of Brenda on Flickr