You are here: Home / Technicolor Life / Inspired Life / What Would June Cleaver Do?
Disclosure: Some of the links below are affiliate links, meaning, at no cost to you, I will earn a commission if you click through and make a purchase. Thank you for supporting ModernRetroWoman.com! 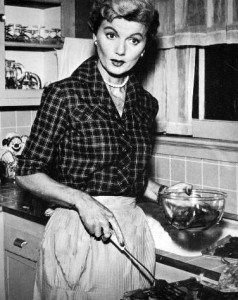 Fake it until you make it.  How many times have I heard that advice?  It seems trite, but there is actually evidence that “learned optimism” helps people overcome depression or addiction.  Unfortunately, the language of the phrase can also backfire…

Despite my incredible professional success, I was often plagued by what is called “the impostor syndrome or phenomenon.”  In a nutshell, this phenomenon occurs when, despite the evidence to the contrary, someone feels like they don’t deserve their successes they’ve achieved.  They believe they are a fraud and will be found out or exposed for what they really are: a big fat faker (note that this is different from those women who really are impostors…the phenomenon applies to those that believe they are big fat fakers but really are qualified for their positions).  After conducting numerous workshops on overcoming the feelings of being impostor, I know that women from every walks of life, including homemakers, can occasionally battle these feelings.

So what can we do?  Instead of telling ourselves to “fake it,” which we already feel like we are doing, we can ask ourselves, “What would (insert role model and/or heroine and/or latent persona here) do in this situation?”  We can then put the answer into play.  For example, I  have often asked myself what my Grandmother Lois or Great-grandmother Daisey would do when dealing with life frustrations.  This enables me to tap into my pioneer woman DNA and remember that I really have it good compared to some of the difficulties they encountered.  With this reminder, I’m able to face difficult situations head on instead of shrinking from them (or hiding under the covers of the bed like I really want to do).

As homemakers, we are constantly battling the myths surrounding “the perfect 1950’s homemaker.”  We may strive to be her, yet there really aren’t any guidebooks telling us how to achieve that homemaking perfection.  And so we may end up feeling like frauds or failures for not living up to that vague ideal.

I think the answer to this dilemma is to latch onto several role models–instead of trying to emulate the myth–and create our own persona.  The role models don’t necessarily have to be real, just realistic, and they don’t actually have to reflect the reality of the person, just our perception of the reality. I’m sure that there were times that Audrey Hepburn looked like a mess but my perception is that she had a trademark style that worked for her.

We start this process by making a list of our role models–from real life, fiction, history, anywhere.  We then list their traits…those things that resonate within us and inspire us.  From there, we can create our own inner persona that we can draw upon. For example, many years ago, I had a client who would call upon her inner super-hero persona whenever she needed to bolster her confidence before going into politically tricky situations at the university.

As we begin to “act as if” we were that person, we will begin to internalize those traits we desire to possess and before you know it, others will view YOU as role model and will be asking themselves what YOU would do in a particular situation!

What are the traits of your role models?