You are here: Home / Home Ec 101 / Money Management / Wise Use of Credit
Disclosure: Some of the links below are affiliate links, meaning, at no cost to you, I will earn a commission if you click through and make a purchase. Thank you for supporting ModernRetroWoman.com! 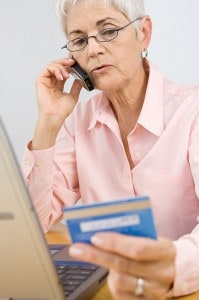 My very first credit card was from JC Penney with a credit limit of something like $200. I was either 23 or 24 and credit card companies hadn’t yet set up shop at colleges offering to give students free t-shirts in exchange for signing up for the credit card. I used it to buy a sewing machine and slip covers for my hand-me-down furniture for my first apartment. I then got a Sears card, then a Visa, and then…well, by the time I was 30, credit was much easier to obtain and I had opened a charge account at all of my favorite stores “to take advantage of the discounts.” I was naive enough to think that I was saving money by having the cards. The problem was, I didn’t realize how very easy it is to go over one’s planned spending when plastic is used. Depending upon which report you read, people who use plastic–whether it is debit or credit–will spend anywhere between 20 – 50% more than if they had paid with cash. (and read here, too).

When we switched over to the “envelope method” a couple of years ago, it took me a lot longer to do our weekly money management because I kept thinking that I had messed up.  We suddenly had a whole lot more money because we were paying with cash (except for our usual monthly bills) instead of with the debit and credit cards.

But credit itself is not the bad guy.  The problem seems to be that we forget that credit is real money, too.  In this slightly surreal 12-minute educational film from 1960, “Mr. Money” teaches two high school students about the different types of credit and how to use credit wisely.  Although credit cards were available when this film was made, they were limited and the expectation was that the charge would be paid off when the bill arrived.  While watching the film, note how the “cash installment loan” resembles how people have used credit cards during the past few years. What I really like about this film is that it teaches how to decide how much credit one can afford (not how much they can obtain).

The best lines from the film:

“To earn credit, you have to build character.”

Note: The film constantly bounces/rolls.  If you get dizzy easily, just listen to the audio of the film instead of trying to watch it.

Click here to watch film if player doesn’t show up below.